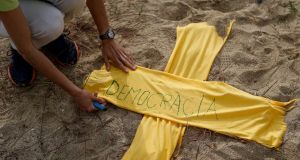 Yellow ribbons shaped as a cross are placed on a beach near Barcelona in support of jailed Catalan separatist leaders on May 27th, 2018. Photograph: Pau Barrena/AFP/Getty

Almost a year on from the drama and turmoil of Catalonia’s failed independence bid the region is, for the most part, relatively calm. But the tensions between separatists and unionists remain and can be heard in the outbursts of politicians, or seen in the fury of social media exchanges. They are also visible in public places across the region, as the two sides wage a battle to ensure that the symbols of their respective causes are on prominent display.

For unionists, that symbol is the red-and-yellow striped Spanish flag. Previously rarely seen anywhere other than on public buildings, over the last 12 months it has become a common adornment on apartment balconies in parts of Catalonia and across Spain, while many people wear the flag as a wristband or dangle it from their car rear-view mirror.

For Catalan secessionists, meanwhile, a yellow ribbon symbol has gone viral. Originally it protested the jailing last year of rank-and-file independence leaders Jordi Sànchez and Jordi Cuixart, and since then it has become a symbol of solidarity with all the independence figures who are in prison awaiting trial for their role in last autumn’s events. It can be seen on public buildings in pro-independence towns, but it is also on display on balconies, park railings, beaches and jacket lapels.

“The conflict over symbols in Catalonia has made the jump from the institutional to the social,” noted right-wing newspaper La Razón.

This symbolic conflict has at times boiled over and fed into fears that the Catalan crisis runs the risk of turning violent.

On Saturday, in Barcelona, a man attacked a woman whose children had been removing yellow ribbons from the railings surrounding the Ciutadella park, leaving her with a broken nose. In the ensuing furore, unionists have presented this episode as an example of the independence movement’s violence.

Inés Arrimadas, spokeswoman for the Ciudadanos party, said that it reflected “a serious social fracture which is being experienced in Catalonia, where those of us who don’t think like the separatist government suffer problems of co-existence”.

The independence movement, meanwhile, has highlighted the assailant’s claim that it was the children’s littering of the street that provoked him, rather than any political motive. Nonetheless, Ciudadanos has called a demonstration for Wednesday in Barcelona to express support for the victim, a Russian woman who is married to a politician from the party.

A lot of time has been wasted, not just by citizens, but by the Spanish government

The removal or vandalism of pro-independence emblems has become a regular occurrence. El País newspaper estimated there have been about 20 clashes this summer sparked by people dismantling them. On July 22nd, for example, a car drove through the pedestrianised main square of Vic, running over rows of yellow crosses placed there in tribute to the jailed independence leaders and nearly hitting some bystanders.

Both sides are now accusing each other of overreacting and tolerating the use of violence in relation to this issue.

The Catalan prosecutor’s office, supervised by the Spanish state, is investigating why members of the region’s local police took down personal details of individuals who had been removing yellow ribbons from public places in three towns. Meanwhile, Catalan president Quim Torra wrote to the Spanish interior ministry asking it to probe the “escalating violence” provoked by organised groups removing ribbons.

“This is a non-violent movement,” Liz Castro, a writer and pro-independence activist, told The Irish Times. “They’ve put our people in jail, so we’re going to use yellow ribbons to call for our people to be released . . . and public spaces are for everyone to express themselves.”

She added that unionists, particularly Ciudadanos, are “trying to distort” the image of the independence movement, in a bid to present it as violent.

For unionists, the backlash against the yellow ribbons is a logical response to several years during which pro-independence Catalans dominated the streets with secessionist symbols and massive demonstrations. Although they represent at least half of Catalan society, until recently unionists tended not to express their politics as openly as their adversaries.

“A lot of time has been wasted, not just by citizens, but by the Spanish government, when it came to realising the scale of the attack on democracy by the independence movement,” said Arcadi Espada, a journalist and outspoken unionist.

If somebody paints your name on your front door and writes that you’re an idiot, what are you going to do?

On Friday, Espada was questioned by police in L’Amettla de Mar after he and some friends painted a red line on to a large yellow ribbon in front of a statue, converting it into a Spanish flag.

Espada told The Irish Times that he has carried out similar actions “six or seven times”, describing the ribbons as a “yellow plague” which slanders Spanish democracy by falsely claiming that the country has political prisoners.

“If somebody paints your name on your front door and writes that you’re an idiot, what are you going to do, write underneath that you’re a good man or wipe it off?” he said.

On September 11th, Catalonia will celebrate its Diada, or national day, and three weeks later will be the first anniversary of the outlawed and highly divisive October 1st referendum on independence. It could be that Catalonia’s battle of the symbols is only just beginning.