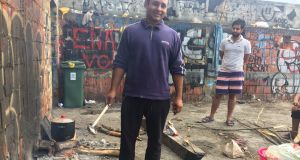 They call it “the game”, and its risks and rewards can be life-changing.

For thousands of migrants now gathered here in northwest Bosnia, winning the game means reaching Italy or Austria – a promised land of safety and prosperity – after crossing Croatia and Slovenia undetected.

Losing means being sent back to a squalid Bosnian border camp at Velika Kladusa, or a derelict dormitory in nearby Bihac, which mark the start of this level of the game; for many it also brings robbery and violence and, for a few players, death.

Bosnia has recorded the arrival of 11,000 migrants this year, after registering only 755 in 2017. The “Balkan route” by which more than a million people reached the EU in 2015 has thereby taken a new turn to avoid tighter border controls.

About 4,000 migrants are currently in Bosnia at any one time, with hundreds arriving each week through Montenegro and Serbia and moving on into Croatia, through thickly wooded hills around Velika Kladusa that they call “the jungle”.

People keep coming here from the Middle East, Central Asia and North Africa, despite the appalling conditions and mounting reports of Croatian police violence, as they race to complete the game before autumn rain and cold weather hit Bosnia.

As the travellers huddle over smart phones to study Google Maps and chat groups full of tips and warnings for the way ahead, they may be unaware of another growing threat – the anti-migrant messages now being peddled by some Bosnian politicians ahead of national elections on October 7th.

Like all the migrants here, Fouad Abd Rahim hopes that by election day he will have left Bosnia far behind.

Abd Rahim says he left Deir al-Zor in eastern Syria almost a year ago with his wife and three-year-old daughter, who has asthma, and travelled through Turkey, Greece, Albania and Montenegro before arriving here three months ago.

Four times they have managed to cross Croatia to Slovenia, before being caught and sent back here.

Croatian police took my money, smashed my phone and beat me on my legs

He says he once watched helplessly as Croatian police severely beat four Pakistani men with whom he was travelling; back in Bosnia, a people-smuggler stole €2,000 from him at gunpoint.

For several months he rented a flat in Velika Kladusa until the owner told the family to leave.

Now they are living in this desperate outpost of ragged tents and crude shelters, pitched in a dusty clearing beside a dog shelter and a fetid stream. There is a makeshift washing area and a few rancid portable toilets, but most people just use the woods. On recent days the temperature has climbed towards 40 degrees, while during summer storms, rainwater and raw sewage flood the camp.

“In two or three days I will try to leave again, inshallah,” Abd Rahim says.

Muhammad Yasir says he left Pakistan after a grenade was thrown at the Dunya television station in Faisalabad where he worked as a cameraman and reporter, and a gunman shot at his uncle’s house.

He paid to be smuggled by truck from Istanbul to Vienna, but the driver left him in Budapest, where he was caught by Hungarian police and pushed over the country’s southern border into Serbia – even though he had arrived via Romania.

Since reaching Velika Kladusa in June, he has twice set out for Italy. Once he made it to Slovenia before being caught and handed back to the Croatian police. The second time he was detained just a few kilometres inside Croatia.

“Croatian police took my money, smashed my phone and beat me on my legs,” he says, rolling up his jeans to show the marks.

In a dysfunctional country that is still deeply divided between Muslims, Serbs and Croats, politicians are using migration as a political weapon

“Then they took my sleeping bag and set it on fire in front of me. I know it is illegal to cross the border like that, but why take people’s money and phones? Why beat people? Where is the humanity in the European Union?”

Most people at Velika Kladusa who have been caught by the Croatian border forces speak of theft, broken phones and casual violence. Volunteers working in the area have documented many cases and taken photographs of injuries inflicted.

“There are consistent stories from migrants about violence on the Croatian side of the border ... but no such stories about Bosnian police,” says Peter Van der Auweraert, representative in Bosnia for the International Organisation for Migration (IOM), the UN’s migration agency.

“For me – without knowing what is happening over there – this should be enough to trigger an official investigation.”

The IOM is helping Bosnia to prepare for autumn and winter, when the spartan camp at Velika Kladusa and roofless, windowless dormitory in Bihac will be hopelessly – and dangerously – inadequate for the needs of thousands of people.

The EU has recently given Bosnia €7.5 million to spend on managing migration, and the priority is to patch gaping holes in the dormitory and move people from the border shanty to more sturdy accommodation.

“MSF is concerned that if similar conditions persist during the winter, this will put the safety and lives of many men, women and children at serious risk.”

A combination of tightening Croatian border controls and bad weather – winter brings snow and freezing temperatures to this region – could trap even more migrants here in Una-Sana canton, testing the patience of its people and the resources of its police.

Residents of Bihac and Velika Kladusa have shown extraordinary generosity to the migrants since they started arriving in large numbers in spring, giving them food, clothing and even free accommodation – perhaps partly because of their own memories of displacement from Bosnia’s 1992-5 war.

There have been no serious clashes between migrants and locals and only a few minor thefts attributed to the travellers, but nonetheless residents are troubled by the presence of thousands of young foreign men in their streets and parks.

“We have brought in officers from other municipalities and we’ve increased street patrols to ensure people in Bihac feel safe,” says Sero Druzic, acting police commissioner for Una-Sana canton.

“For now we are handling the situation. But I’m calling on those who have the power to do something now, because winter is coming,” he adds, emphasising the urgent need for new state-run accommodation for asylum-seekers.

Failing to offer them a decent place to sleep is to invite crime, he explains.

With elections looming, however, no Bosnian politician wants to admit to voters that migrants could be here for years, or to persuade them to accept a new accommodation centre in their area.

Moreover, in a dysfunctional country that is still deeply divided between Muslims, Serbs and Croats, politicians are using migration as a political weapon.

Serb nationalist Milorad Dodik has refused to allow migrants into the Republika Srpska region that he runs, and claims their arrival in Bosnia is part of a conspiracy to boost its Muslim population.

When in May Bosnian Croat police blocked buses carrying hundreds of migrants for several hours, Bosnia’s security minister Dragan Mektic called it a kind of “coup”.

Politicians at all levels are using the migration issue to attack their enemies – and Bosnian statehood – by claiming officials and the country are unable to cope.

In Bihac, Druzic has had to quash inflammatory fake news about migrants in local media, most of which outlets have strong political affiliations.

“There was fake news about a huge fight between locals and migrants. There was a report that a migrant had died in a brawl, which was false. And there was a story that four Afghans raped a young local girl – that was also fake,” he says.

Migrants do fight among themselves, however, and in June a Moroccan was stabbed to death in Velika Kladusa; in May a young Afghan drowned in the Korana river on the Bosnia-Croatia border, and this month Croatian police said two migrants had been killed in a rock fall in woods about 85km from the frontier; migrants are also often hurt in crashes involving smugglers’ overloaded cars.

Yet despite these dangers and the dire conditions, few migrants here even contemplate going home – an indication of the misery they left behind.

“We call it the game because it’s like a video game,” says Yasir, who one day hopes to write a book about his tortuous journey from Pakistan.

“If you get caught, you have to start again.”