‘Form of madness’: Australia in political chaos as rivals fight for leadership 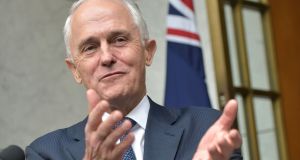 Australia was in political chaos on Thursday as Prime Minister Malcolm Turnbull accused supporters of leadership rival Peter Dutton of bullying MPs in a bid to force him out of office.

The government adjourned parliament, reshuffled cabinet ministries and prepared for a second Liberal party leadership contest to be held on Friday, which is expected to decide who will become Australia’s sixth prime minister in just over a decade.

Mr Turnbull said he would stand aside from the contest if a majority of MPs called for a new leadership vote and would encourage his supporters to back Scott Morrison, Australia’s treasurer, who is preparing to stand against Mr Dutton.

But in a dramatic move, Mr Turnbull said he had asked the solicitor-general to provide advice on whether Mr Dutton was eligible to sit in parliament. This follows concerns raised by opposition MPs that Mr Dutton’s private commercial interests may place him in breach of the constitution, as some childcare centres he owns are in receipt of public funds.

“This issue of eligibility is critically important,” Mr Turnbull said at a press conference in which he attacked his critics. “You can imagine the consequences of having a prime minister whose actions and decisions are questionable because of the issue of eligibility,” he added.

“What we have witnessed at the moment is a very deliberate effort to pull the Liberal party further to the right,” he said, describing these actions as a “form of madness”.

The Liberal party is divided between its conservative and moderate wings - an underlying tension that in key policy areas has prevented the Liberal-National coalition from presenting a coherent agenda and ultimately destroyed Mr Turnbull’s leadership.

Mr Turnbull attempted to steer a middle course between the two factions but came under attack from conservative critics, particularly Tony Abbott, the former prime minister who he ousted in 2015.

“What began as a minority, has by a process of intimidation, you know, persuaded people that the only way to stop the insurgency is to give in to it,” he said.

The prime minister’s attack on his critics followed the resignation of three key cabinet supporters - Mathias Cormann, minister for finance; Michaelia Cash, minister for jobs and innovation; and Mitch Fifield, minister for communications - and a call by Mr Dutton for a second vote for the Liberal party leadership.

Mr Dutton, a leading conservative in the party and former home affairs minister, lost a leadership contest on Tuesday against Mr Turnbull by 48 votes to 35. He has said he believes he can perform better than Mr Turnbull at the next election, which is due in the first half of 2019.

In a series of radio interviews, Mr Dutton has laid out a populist policy agenda, which includes cutting immigration, axing a 10 per cent consumption tax from energy bills and ordering a public inquiry into electricity and fuel companies similar to the current Royal Commission inquiry into alleged misconduct in banking and financial services.

In the volatile atmosphere in Canberra it is possible other candidates could emerge to contest the Liberal leadership, including Julie Bishop, minister for foreign affairs and deputy leader of the party.

Whoever becomes Liberal party leader on Friday will face a struggle to assert their authority before an election.

Mr Turnbull said on Thursday he would resign from parliament if he was ousted as leader - a move that could spark an election as the Liberal-National coalition holds a single-seat majority in the lower House of Representatives.– Copyright The Financial Times Limited 2018