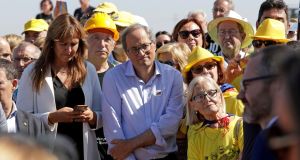 Exactly two years ago, Spain’s territorial crisis, which had been smouldering for over half a decade, suddenly ignited.

The touch-paper was a referendum on independence overseen by the Catalan government in defiance of a court order. The Spanish state’s response – which included deploying riot police to polling stations where they seized ballot boxes and in several cases baton-charged voters – dragged the relationship between Madrid and the northeastern region to a new low.

October 1st has since become a major date in the calendar for the independence movement and, as this year’s anniversary comes round, the Catalan crisis has flared up once again.

Last week, civil guards arrested nine pro-independence activists as part of an investigation into an alleged bomb plot to sabotage Catalan infrastructure. Seven of those held have since been imprisoned pending trial on suspicion of membership of a terrorist organisation, making explosives and conspiracy to cause criminal damage.

Unionist politicians, particularly on the right, have seized on the case as proof that the independence movement is intrinsically violent. The Catalan government and pro-independence groups, meanwhile, have cast the civil guard swoop as a set-up.

“We have always rejected any violence there has been because the independence movement has always been peaceful,” Catalan president Quim Torra said at the weekend, refusing to criticise those accused of the plot.

“We cannot condemn [violence] that does not exist,” he said.

Those arrested are reported to be members of so-called Committees for the Defence of the Republic (CDR), pro-independence civic groups that sprang up around the time of the 2017 referendum. Many of them have in the past taken part in street protests while others have been blamed for blockades of motorways and rail links.

The unionist right has frequently identified the CDRs as dangerous radicals with links to the Catalan government and have presented this case as a major shift in the ongoing crisis.

“This is the first time that people have been arrested with explosives, with plans to attack Catalonia,” Lorena Roldán, spokesperson for the unionist Ciudadanos party in Catalonia, said on Sunday. “And Mr Torra, as head of the Catalan government, applauds and defends them.”

On Saturday, Roldán’s party colleague, Carlos Carrizosa, was expelled from the region’s parliament after warning of feeling “threatened by those who support terrorism”.

There could hardly be a more dramatic backdrop to these developments. By the middle of October, the supreme court is due to deliver its verdict on the trial of 12 independence leaders who are facing serious charges related to 2017’s failed bid for secession. Anything other than a full acquittal is expected to draw a major backlash from the independence movement, which has questioned the trial’s legitimacy.

Torra is among those who draw a link between the recent arrests and the upcoming verdict, seeing the detentions as a way of justifying tough sentences against those who were on trial.

As tensions have risen, Spain’s Socialist government has started to warn of the possible consequences of an attempt by Catalonia’s leaders to emulate the events of 2017, when the region’s parliament declared a short-lived independence.

Prime minister Pedro Sánchez told supporters at the weekend that “if the independence movement again violates the legal framework, the government will respond with calm firmness to guarantee co-existence, territorial unity and self-government”. Many see this as a thinly disguised pledge to reintroduce direct rule in Catalonia, a measure employed by the previous government for several months.

“Turbulent times are coming and it would be a good idea not to make the mistakes of two years ago,” noted journalist and commentator Jordi Juan, in a warning to both sides. “But it looks as if we’re going straight back to repeat them.”