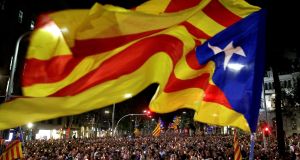 If proof was needed that Spain’s Catalan crisis had transcended the political sphere and become one of Europe’s most eagerly followed issues, this was it. As football coach Pep Guardiola addressed the media after his Manchester City team’s home Champions League victory against Napoli on Tuesday, he paid tribute to two Catalan independence leaders who had been jailed the previous day, 1,500km away in Madrid.

Guardiola, himself a Catalan, told reporters, “We hope they can be released soon because right now it feels as if we all were there.”

The two jailed men were Jordi Cuixart and Jordi Sánchez, leaders of the pro-independence grass roots organisations Òmnium Cultural and the Catalan National Assembly (ANC), respectively. They face charges of sedition for organising mass demonstrations outside a Catalan government building being searched by civil guards in Barcelona on September 20 and 21.

A high court judge believes those protests impeded the hunt for material linked to an upcoming independence referendum that had been deemed illegal.

Cuixart and Sánchez, who have not yet been tried, are so far the only high-profile members of the independence movement to be imprisoned. But this latest twist in the standoff between Catalonia and Madrid signalled an escalation in the biggest political crisis of Spain’s modern era.

As soon as news of the duo’s incarceration emerged on Monday night, people across Catalonia leaned out their windows and started banging pots and pans in an impromptu cacerolada protest. The next night, tens of thousands of demonstrators took to the streets of Barcelona and other cities. Political columnist Lola García noted, “We are entering another phase in this conflict – a more hostile one.”

By Thursday, few could doubt that prediction. A series of ultimatums and warnings exchanged by the Catalan and Spanish governments culminated in the former threatening to implement a unilateral declaration of independence which it had held on ice for the previous 10 days. Spain’s prime minister, Mariano Rajoy, responded by announcing he was taking the unprecedented step of intervening in Catalonia’s autonomous government to introduce direct rule from Madrid.

“May nobody doubt that the [central] government will put at its disposition all possible means to restore legality and constitutional order,” said Rajoy’s spokesman, Íñigo Méndez de Vigo.

The epicentre of this crisis has been the independence referendum, held on October 1st. Planned and discussed for months beforehand, it always looked like being a day of reckoning for the relationship between the Spanish government and the northeastern region.

The Catalan government, led by Carles Puigdemont, argued that, after Madrid had repeatedly rebuffed its efforts to stage a negotiated, Scotland-style, vote on the independence issue, its only choice was to hold a unilateral referendum.

A relatively small number of Catalans had long wanted independence, citing economic and political grievances. But their ranks have swollen in recent years, becoming a large minority, due in great part to the 2008-2013 recession and tensions with Rajoy’s government.

The conservative central government deemed the referendum project illegal, arguing that all Spaniards would have to vote on a breakaway. Rajoy vowed to prevent the vote from taking place and he received the support of the courts, which sanctioned the seizure of electoral material and the arrest – and then release – of a dozen Catalan government officials in the build-up to the vote.

On October 1st itself, the referendum went ahead, although Spanish police were deployed to a number of polling stations, making headlines around the world by beating voters with truncheons and grabbing ballot boxes.

That violence threatened to overshadow the result of the vote: 90 per cent in favour of independence, according to the Catalan authorities. The figures have been vigorously disputed, given the informal circumstances under which much of the voting took place and that turnout was only 43 per cent.

However, on October 10th, Puigdemont announced that the result represented a “mandate allowing for Catalonia to become an independent state in the form of a republic”.

Puigdemont immediately suspended that declaration, saying he wanted to give Madrid a last chance to sit down and talk.

But he now appears determined to formalise his region’s independence as a response to the Spanish government’s decision to trigger article 155 of the constitution, which allows it to introduce direct rule. This is the first time the article has been used since the return to democracy in the late 1970s after the four-decade dictatorship of Francisco Franco.

Xavier Arbós, a constitutional expert at Barcelona University, says the vague nature of the clause makes it dangerously open to interpretation. Spain, he says, is in uncharted territory.

“It’s never been used before and so what they have to decide is what measures they should take in order to achieve the objectives laid out in article 155,” he explains. Its implementation, he adds, “could lead to an increase in the tensions”.

One option Rajoy is believed to be mulling under the aegis of the article is to call a regional election in Catalonia, in a bid to break the stalemate. However, there are fears that an election under such circumstances could deepen, rather than narrow, the divide between Catalans.

While this conflict has been characterised by the entrenched positions of the two sides, with neither willing to cede, there is a feeling that the independence movement has already won a crucial battle: that of international public relations.

The images of Spanish riot police attacking voters on the day of the referendum undoubtedly contributed to that notion. Juan Carlos Girauta, of the Ciudadanos party, which staunchly opposes Catalonia’s right to self-determination, recently complained to the Spanish parliament that the independence movement had managed to “create in the international imagination the idea that present-day Spain has something in common with the Spain of the Franco era”.

Rajoy’s preference for a rigid and legalistic approach to the independence drive, rather than political engagement, has compounded that idea; but so too has the slick PR machinery of the separatist cause.

Within minutes of Cuixart and Sánchez being jailed on Monday, an online poster had gone viral, depicting the two men, dressed in white next to the slogan “Llibertat Jordis!” (“Free the Jordis!”). They had each also prepared a video message for their supporters, in the event of their detention. A three-minute video was also soon circulating, in English, in which a young woman presented Catalonia as a utopian region under siege from an oppressive state.

Such initiatives draw scorn and ridicule from opponents of independence, and Madrid has successfully kept the governments of powerful EU countries such as France and Germany on its side in this dispute. But Josep Borrell, a Catalan Socialist and former Spanish government minister, recently admitted “the independence movement has won the battle of emotions, of image, of mobilisation”.

That ability of the independence movement to mobilise will be showcased over the coming days and weeks. Today, a massive demonstration is scheduled in Barcelona against the jailing of Cuixart and Sánchez and the triggering of article 155.

Until recently, pro-Spain Catalans often claimed they were the “silent majority” – big in numbers but muted by lack of unity and a reluctance to speak out against the noisy separatist phenomenon.

However, a recent demonstration in Barcelona marked the first time they had successfully competed with the highly organised independence movement in terms of physical presence, suggesting that the territorial crisis is now shifting from the corridors of power to the streets.

Both sides are now putting in motion their nuclear options: in the Catalan government’s case, the unilateral declaration of independence; in Madrid’s case, the mysterious article 155.

With each seen as highly inflammatory, the Catalan drama looks far from being resolved.