Q&A: What happens next in Spain-Catalonia standoff? 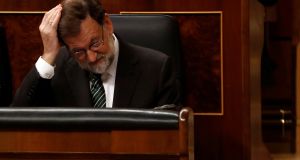 A little more than two weeks after the Catalan independence referendum, which plunged Spain into its worst political crisis in 40 years, the Madrid government has announced it will take the unprecedented step of suspending Catalonia’s regional autonomy and imposing direct rule.

Spain’s prime minister, Mariano Rajoy, has repeatedly warned the Catalan government that its unilateral bid for independence is illegal and unconstitutional. He had given the Catalan president, Carles Puigdemont, until Thursday morning to abandon his secession campaign and return to “constitutional order”.

Puigdemont refused to do so and has retaliated by threatening to declare unilateral independence if the Spanish government tries to suspends the region’s autonomy.

How will the Spanish government take control of Catalonia?

By holding an emergency cabinet meeting on Saturday to invoke article 155 of the country’s 1978 constitution. The measure, which has never been used, states: “If a self-governing community does not fulfil the obligations imposed upon it by the constitution or other laws, or acts in a way that is seriously prejudicial to the general interest of Spain, the government, after having lodged a complaint with the president of the self-governing community and failed to receive satisfaction therefore, may, following approval granted by the overall majority of the senate, take all measures necessary to compel the community to meet said obligations, or to protect the above-mentioned general interest.”

In other words, if Puigdemont fails to fall into line, the Spanish government will submit its proposals to the senate for debate and approval. As such, article 155’s effects will not kick in for a while.

What will the Spanish government actually do?

“Article 155 is not designed to remove Catalonia’s autonomy but to ensure that its autonomy exists within the law,” he said. “We have envisaged a range of scenarios and will apply 155 accordingly. It’s not a question of applying it in its entirety or of taking over every government function or department. Clearly the Catalan government would lose many of its powers, though not all. It’s a case of using a scalpel, not an axe.”

The spokesman said one measure under consideration would be closing Catalonia’s overseas delegations or “embassies”.

More dramatically, Rajoy could use the article to call new regional elections in the hope that they provide an administration more amenable to remaining in Spain. It could, however, backfire if the separatist politicians find themselves returned to office with an increased share of the vote.

The current Catalan government is made up of a coalition of pro-independence parties that took 47 per cent of the vote in 2015 elections, which were billed as a de facto referendum on independence.

Is there another way out?

On Wednesday, Spanish government sources had indicated that Madrid would be prepared to hold off on 155 if Puigdemont were to call a snap regional election without a confirmation of independence.

But the Catalan foreign minister, Raül Romeva, said such a move was not being considered, telling reporters in Brussels on Wednesday: “Elections from our perspective are not an option.”

What does the Catalan government say?

It argues the Spanish government has already in effect activated article 155 by intervening in the region’s finances and sending thousands of Guardia Civil and national police officers to Catalonia.

Towards the end of last month, Puigdemont accused Rajoy’s government of a de facto suspension of regional autonomy and a de facto declaration of a state of emergency after Spanish police raided Catalan government offices and arrested 14 officials as part of an unsuccessful attempt to stop the referendum.

How will pro-independence Catalans react to the triggering of 155?

Tensions in the region are still running high after the police violence that marred the referendum on October 1st and a judge’s decision to deny bail to two Catalan independence leaders accused of sedition. Add to that the continuing presence of Guardia Civil and national police officers and the situation looks fraught.

But it is worth remembering that the pro-independence strikes and demonstrations held so far have been almost overwhelmingly peaceful affairs. If some Catalan separatists decided to push back against 155, they would probably do so by going on strike or by forming human chains around key regional government buildings.

Much could also depend on the reaction of the Catalan police force, the Mossos d’Esquadra. Spanish police unions have accused the Mossos of failing to do enough to prevent the referendum and the head of the force, Josep Lluís Trapero, is also being investigated for alleged sedition.

Will the application of article 155 bring an end to the crisis?

Extremely doubtful. The Catalan independence effort has acquired momentum over recent years and most campaigners say they are in it for the long haul. Similarly, the Spanish government can’t afford to back down when it comes to such a direct challenge to national and territorial unity.