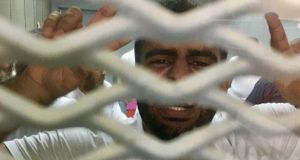 The Egypt that Ibrahim Halawa will leave within days after spending four years in prison is a military-run state where human rights are regularly breached.

It is also one of the few stable states in a region dominated by wars and terrorist groups, and is therefore vital to western security interests.

Its location between conflicts to the west and the east, and in the path of migrant flows north from sub-Saharan Africa, lends it further strategic importance.

This complex matrix of factors explains the divergence between those who emphasise human rights and others, who prioritise Egypt’s continuing stability above other considerations.

The unexpected sequel to the democratic movement that drove the 2011 revolution and brought an end to the 30-year dictatorship of Hosni Mubarak was the election as president of Mohamed Morsi of the Muslim Brotherhood.

Within a year, amid continuing turbulence, Morsi was deposed by the military. Its candidate, Abdel Fattah el-Sisi, was elected president shortly after in an election described by European Union observers as free but not necessarily fair.

El-Sisi has restored stability to the region’s most populous country, but at the price of growing human rights violations, according to observers.

Similar criticisms are made in a US State Department memo leaked in September, which said Egypt was failing to protect free speech and its minorities, or investigate abuses by its forces. “There is a continuing problem with arbitrary arrests, detentions and disappearances,” the memo says. “There are reports of extrajudicial killings. There are numerous allegations of torture and deaths in detention.”

A nervous, even paranoid atmosphere pervades Cairo. A simple football match is seen as a potential focus for dissent; so armed police and tanks line the route to the stadium, which is left half full, and traffic is brought to a standstill for hours.

One experienced journalist, who has covered war zones throughout the Middle East, describes Egypt as one of the most difficult environments they have worked in. Any attempt to film downtown quickly attracts the attention of the police, and spies are said to be everywhere.

European diplomats in Cairo decline to talk on the record, citing the “difficult situation” in the country. “Our interest is in the sustainable stability of Egypt, while giving people the space to express critical opinions,” is how one describes the current state of affairs.

The problem is that this space for dissent is virtually non-existent at present. Just as Halawa spent four years in prison without trial after taking part in an anti-government protest in 2013, so have hundreds of others been incarcerated for dissent.

They include Tarek Hussein, a young human rights lawyer who recently told journalists of his experience of being detained illegally for six weeks by police. He has accused officials of denying prisoners their legal rights, brutal interrogation methods and attempting to extract false confessions.

Also last month, prominent human rights lawyer Ibrahim Metwally Hegazy, a co-founder of the Association of the Families of the Disappeared, found himself “disappeared” for days when he was arrested at Cairo airport as he prepared to fly to Geneva to address a UN meeting.

One of the cases he was due to speak about was that of Italian student Giulio Regeni, who was murdered in Egypt last year.

Halawa, now aged 21, is unlikely to say much after his release from jail last night, at least so long as he remains on Egyptian soil. He has spent one month in custody since being acquitted of all charges.

But he has already described in detail the mental and physical abuse he has suffered while in jail.

“It’s normal to be cursed, stripped naked, beaten with a bar, or put in solitary confinement or the “tank” (a pitch-black 3.5m x 5.5m cell),” he wrote in an article in the Guardian last year.

“Each time you are transferred to a new prison, there is something called ‘the party’. They show you who’s boss. In most cases it’s beatings, but in one, we were stripped, told to lie down facing the ground with our arms behind our back, and they started to jump on our backs, from one prisoner to the next.”

It is impossible to overstate the importance of the military in Egypt.

The army is the tenth largest in the world. For miles and miles, the highway from Cairo airport to the city is lined with army-owned buildings. Diverse branches of the military have myriad business interests in society, from construction to food sales, agriculture to wedding planning.

Yet despite its security infrastructure and economic muscle, the military’s hold on power is uncertain.

“They are losing their grip,” claims one foreign observer in the country. “They have the same policies against the Muslim Brotherhood as Mubarak had - to cut the organisation off at the head - but that leaves a vacuum.”