Absher, launched in 2015, allows men to manage women under their guardianship 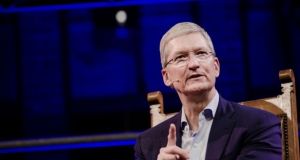 A Saudi mobile application that lets men track and restrict the movements of women in the kingdom has come under increased scrutiny this week with a US senator and rights groups urging Apple and Google to remove it from their platforms, accusing the technology giants of facilitating gender discrimination.

Saudi “guardianship laws” give women a legal status similar to that of minors in many areas of their lives. Every Saudi woman, regardless of age, has a male “guardian”, usually her father or husband, but sometimes her brother or son, who must give his permission for her to get a passport, travel abroad, undergo certain medical procedures or get married.

The app in question, called Absher, was launched in 2015 by the Saudi government. It allows men to manage the women under their guardianship by giving or revoking their right to travel through airports, tracking them by their national identity cards or passports. The men can turn on notifications that alert them with a text message any time a woman under their guardianship passes through an airport.

Absher, which roughly translates as “yes sir”, can be downloaded from both the Google Play store and Apple’s app store, which critics say makes the tech companies complicit in the repression of Saudi women. The effort to pull Absher from the platforms got a boost this week when US senator Ron Wyden demanded as much in a letter to the two companies.

“It is hardly news that the Saudi monarchy seeks to restrict and repress Saudi women, but American companies should not enable or facilitate the Saudi government’s patriarchy,” Mr Wyden wrote in the letter, which was released on Monday. Addressing Tim Cook and Sundar Pichai, the chief executive officers of Apple and Google, Mr Wyden said the companies were “making it easier for Saudi men to control their family members from the convenience of their smartphones and restrict their movement.”

He requested that they prevent their companies from “being used by the Saudi government to enable the abhorrent surveillance and control of women.” Representatives of Apple and the Saudi government did not immediately respond to requests for comment. A Google spokesman confirmed that the company is assessing the app to determine if it is in accordance with its policies.

Saudi Arabia has one of the world’s most restrictive environments for women, although the country’s de facto ruler, Crown Prince Mohammed bin Salman, has pushed to loosen some constraints since his father, King Salman, ascended the throne in 2015.

Since then, the kingdom has eased restrictions on women’s dress, expanded the range of fields for women in the workforce and began offering physical education classes for girls in government schools. Last year, Saudi Arabia lifted a long-standing ban on female drivers, a move hailed as a major milestone.

But critics say that Saudi women cannot achieve equality as long as the kingdom maintains its guardianship laws. Saudi officials argue that such restrictions are rooted in their culture and supported by many in the kingdom.

When asked about the issue in an interview last year, Crown Prince Mohammed said that Saudi Arabia had to “figure out a way to treat this that doesn’t harm families and doesn’t harm the culture.”

Absher, which can be used by Saudi nationals and residents of the kingdom, more broadly is an online portal where both men and women can access a range of government services, from paying traffic tickets to applying for new identification cards. The control of women is just one of its functions.

The repression of Saudi women jumped into the headlines last month when an 18-year-old Saudi, Rahaf Alqunun, barricaded herself in a hotel room in the Bangkok airport to avoid being returned to her family. She had slipped away from her family during a holiday in Kuwait and boarded a plane for Thailand, but was stopped in the airport. She was later granted asylum in Canada.

Another Saudi woman who had fled the kingdom for Australia described covertly using her father’s phone to access Absher and give herself permission to travel, allowing her to leave the country undetected.

Human rights groups including Amnesty International and Human Rights Watch have long campaigned for guardianship laws to be repealed, but the targeting of Absher and its availability on Western tech platforms is new. Hala Aldosary, a Saudi scholar and activist based in the United States, said that the removal of the app by Apple and Google could send an important message to leaders like Crown Prince Mohammed, who have sought out partnerships with global tech firms in efforts to enhance their economies.

“If the tech companies would say, ‘You are being oppressive,’ that would mean a lot,” Ms Aldosary said. But removing the app would not get rid of the country’s guardianship laws, she said, and men could still change their female relatives’ status online or in government offices. “The app is a means to an end, but it is not the end,” she said. “But it does make the lives of guardians easier.”

When asked about Absher in an interview with National Public Radio on Monday, Mr Cook of Apple said he had not heard of it. “But obviously we’ll take a look at it if that’s the case,” he said.

But both companies have responded to similar campaigns to remove apps in some cases. In December, Apple removed a religious app from its online store that portrayed being gay as “a sickness” and “a sin” after a campaign by a gay rights group, NBC News reported.–New York Times

1 Donald Trump is in trouble, and that could spell very bad news
2 Some larger stores to reopen on Monday ahead of schedule
3 House parties are being held ‘with abandon’, Holohan warns
4 O’Doherty and Waters ordered to pay legal costs of case against State over Covid-19 laws
5 Two teenage girls charged with murder of Cian English on Gold Coast
Real news has value SUBSCRIBE