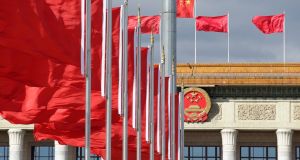 The Great Hall of the People in Beijing: Sweden was the first Western country to establish diplomatic relations with China 50 years ago. Photograph: Reuters/Jason Lee

It was like any other Thursday morning in Ikea in Beijing’s Chaoyang district, packed with shoppers buying furniture, China’s new middle class making lifestyle choices, with a handful of folk catching a nap on the beds in the displays.

Despite the Swedish national colours on display, and the gangs of online trolls calling for boycotts of Volvo cars, H&M clothes and, yes, Ikea furniture, there was little evidence of the international diplomatic storm that is raging between China and Sweden.

Sweden was the first Western country to establish diplomatic relations with China 50 years ago and is a country much admired in China.

The spat began when the Zeng family arrived many hours too early for their booking at the Generator hostel in Stockholm, and were ejected by police after trying to sleep in the lobby.

Video footage showed family members wailing, in English, “this is killing” as the police removed them. China’s ambassador to Sweden, Gui Congyou, demanded an apology for the “brutal abuse” of the tourists.

The Swedes investigated and decided the situation was not as grim as depicted by the embassy, taking no further action. Some critics have suggested the initial outcry was a way of deflecting attention from the arrest of the Chinese-born Swedish bookseller, Gui Minhai, who published anti-government material in Hong Kong and was whisked away by Chinese police from a Beijing-bound train while in the company of two Swedish diplomats.

The row simmered, then boiled over again when Svenska Nyheter (Swedish News), a comedy show on national broadcaster SVT, ran a segment on China that started off with a mawkish satire, inspired by the hostel event, that station managers subsequently said was a comment on how Swedes were inclined to be Sinophobic while being tolerant of other ethnicities.

This was followed, however, by a mock “infomercial” that ran through the list of racist cliches about China, included a sign showing a squatting farmer in a straw hat holding a bowl and chopsticks while defecating. The segment reminded Chinese tourists that to avoid “cultural clashes” they should not eat dogs and should wash their hands after going to the toilet.

The programme then accused Chinese of being racist themselves, while Sweden welcomed black people, Jews, Arabs “and even homosexuals”.

Cue renewed outrage. The Chinese embassy in Stockholm said the segment “spread racism and xenophobia, and incited racial hatred toward China” and demanded an apology.

The embassy issued a travel alert on its website, urging Chinese visiting Sweden to “improve their awareness of safety and carefully select the residential areas and tourist sites they visit”.

A week later, Svenska Nyheter was back to add more fuel to the fire, when it apologised to every Chinese person who took offence at the show, but refused to apologise to the Chinese authorities, citing a lack of media freedom in China. It also ran footage of a forced confession by Gui Minhai.

The embassy described the apology as “ill-intentioned” and said: “Any attempt to put the Chinese people against the Chinese government is futile.”

The foreign ministry in Beijing had earlier weighed in, with spokesperson Geng Shuang calling it a “bigoted and prejudiced” provocation that “breaks the basic moral principles of mankind”.

Some of the remarks on the social media site Sina Weibo have been pretty intense and posts about the spat have been clicked 150 million times.

“Such a dangerous place – why does our government not send out a notice to tell Chinese people not to travel to Sweden there any more,” wrote Ai Wei, while another commentator called Su Mi Cai wrote: “China is not strong enough. When we become stronger, these western countries will be scared of us and respect us more”.

Comrade Jiang Jinyun wrote: “The Swedish attitude is full of ethnic discrimination. This is a deliberate provocation and humiliation of China. They should apologise to us again.”

One particularly angry commentator with the handle Jie Ben Zhuan Li called on the star of the patriotic war movie Wolf Warrior to flatten Sweden with nuclear weapons. “Anyone who offends China will be killed no matter how far the target is,” they said.

The Chinese rap star Li Yijie, better known by his stage name Pissy, who has won the plaudits of the Communist Youth League for patriotic tracks such as This is China and Force of Red, launched a broadside in his song Hey Sweden, which contains the lines: “Hey Sweden, Hey Sweden. How could you be so rude without a reason? Hey Sweden, Hey Sweden. You (are) about to feel the power of the Chinese nation.”

At a European Union event in the upscale Beijing shopping mall, the Place, where European countries can promote their products at national-themed stalls, the Swedish stand was sparsely staffed, and the speculation was diplomats were not keen to attend in the current climate.

Things are calm in the bedroom and office furniture sections of Ikea in Beijing for now, and H&M shoppers are still busy in the Sanlitun village outlet, but there could be trouble in the malls if a diplomatic solution is not found.