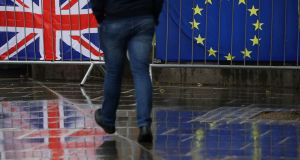 Capital Economics predicted the UK government would probably loosen fiscal policy by as much as 1 per cent of GDP if the UK crashed out of the EU. Photograph: AP

The impact of a no-deal Brexit on Ireland may be less severe than previously thought, according to London-based consultancy Capital Economics.

In its analysis of what a no-deal Brexit would mean for the State, the group said the current suite of forecasts did not take into account the sector-by-sector agreements that would be put in place “to limit disruption at the borders and to airlines” in the event of the United Kingdom crashing out of the European Union.

It also suggested that the consensus view did not factor in the likely policy responses from the Bank of England and the UK government.

“We think that, in a disorderly Brexit, the Bank of England would cut interest rates and perhaps re-launch QE [quantitative easing],” it said.

It also predicted the UK government would probably loosen fiscal policy by as much as 1 per cent of GDP [gross domestic product] in such a scenario.

There are several estimates of the potential impact of Brexit on Ireland’s economy in the long run, ranging from a reduction in GDP of 2 per cent in a best-case scenario to 7 per cent in a worst case.

In its analysis, Capital Economics predicts a no-deal outcome would see Irish GDP growth reduced by 1.5 per cent this year and by 0.5 per cent in 2020. This is the most benign no-deal Brexit forecast yet.

“Given that we think the hit from Brexit to the UK will be smaller than the consensus view, we suspect that the hit to Ireland will be smaller too. But it would still be significant,” the group said.

While noting the prospect of no-deal outcome had risen in recent months, it examined the likely fallout on financial markets, concluding the principal impact would be a further weakening of sterling.

It predicted the combined effect of World Trade Organisation (WTO) tariffs and a stronger euro would raise the cost of Ireland’s goods exports in the UK by up to 25 per cent.

“If the price of those goods in the UK rose by 25 per cent in the UK, so export volumes fell by 25 per cent, then Ireland’s economy would contract by about 1.5 per cent,” it said.

The group said, however, a hard Border between Northern Ireland and the Republic – which could follow a no-deal Brexit – would be much more worrying.

“This is not our area of expertise, but the imposition of a hard border could lead to increased tension and potential security concerns around the Border,” it said.

Capital Economics said it still believes the most likely outcome is that the UK will leave the EU with some form of deal in place. “In that event, we think that any fallout from Brexit for Ireland’s economy would be negligible,” it said.

Meanwhile, in its latest Economic Eye report, EY predicts that a no-deal Brexit would shave 2.5 percentage points off Irish GDP growth this year and a further 1.4 per cent in 2020.

“Modelling a no-deal outcome is challenging given the complexity of how the economy will react,” said Neil Gibson, chief economist for EY Ireland. “Currencies will adjust, and spending by governments, consumers and businesses will be impacted in ways that recent history tells us are hard to predict.”