Despite the wishful thinking of the Brexiteers, this TLA could be a permanent fixture 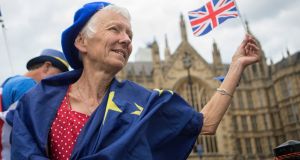 Helen Slater, from Bristol, joins anti-Brexit demonstrators as they wave European Union and Union flags outside the Houses of Parliament in London on Wednesday. Photograph: Rick Findler/PA Wire

A “temporary little arrangement” (TLA) was how Albert Reynolds described the Fianna Fáil-PD coalition of the late 1980s. A necessary, but grubby compromise his party would soon put behind them.

And yet, as a description of the wishful thinking and denial in Fianna Fáil’s unwillingness to face up to the permanent eclipse of its days of governing single-handed, there is a nice historical irony in the euphemism.

The same is likely to prove true of the latter-day TLA, the Northern Ireland “backstop”, and the “temporary customs arrangement” that the UK has floated as its version of the latter.

Far from temporary, the backstop is increasingly looking as if it will have to be a permanent fixture. An unfortunate but necessary fixture alongside any EU-UK trade deal and, like it or not, accompanied by customs/regulatory controls, as Michel Barnier put it last week, “on the ferries”.

Ever since the December joint agreement which set out this fallback guarantee for the frictionless Irish Border it has become clearer by the day that the UK has no clue how to operationalise a commitment it increasingly regrets. Without, that is, introducing customs checks on the Irish Sea and fatally alienating the DUP.

In truth the UK can say the December agreement did not specifically treat Northern Ireland apart from the rest of the UK, as the EU did in its subsequent draft legal text.

“In the absence of agreed solutions,” the December agreement simply says, “the United Kingdom will maintain full alignment with those rules of the Internal Market and the Customs Union which, now or in the future, support North-South co-operation, the all-island economy and the protection of the 1998 [Belfast] Agreement.”

The European Commission insists that its version of this commitment is the best way to preserve the integrity of the single market, making an exception to its rules for a relatively confined area.

London has always made clear it regards the backstop guarantee as very much a second choice, an option not to be deployed unless by the end of the transition period a deal has not been agreed on a comprehensive EU-UK trade/customs arrangement, and then until such an arrangement is put in place. That would allow, they argue, a simple one-stop changeover for businesses.

In suggesting that the EU task force’s Northern Ireland deal – continued participation by the North in the customs union and in major regulatory alignment – can be extended to the rest of the UK for that post-transition hiatus, London is effectively asking for a further extension of the transition for what it says it “expects” to be no more than a year. In fact, indefinitely, a reality that has surprisingly caused no adverse reaction yet among diehard Brexiteers.

But in doing so it is asking the EU to extend to the rest of the UK unique-to-Northern-Ireland “cherrypicking” exceptions to single market rules that the union has agreed exceptionally to safeguard the frictionless border and the achievements of the Belfast Agreement.

The 27 are adamant that is not a runner and say that the UK must come up with an alternative legal commitment by October, or, quite simply, there will be no withdrawal agreement and no transition, the ultimate hard Brexit. That means serious work by the UK on both the Irish and “future relationship” tracks of talks in the next couple of months.

London’s “temporary customs arrangement” is remarkable for two assumptions. Firstly, that a comprehensive EU-UK future relationship agreement can be agreed in political form by October without the UK rethinking its red lines on the customs union and single market membership. A free trade agreement may be possible, but certainly not borderless.

And the related assumption that such an agreement will be such as to provide all the safeguards and guarantees with which the backstop promises to copperfasten the frictionless border. “The UK is clear,” its paper last week acknowledged, “that the future customs arrangement needs to deliver on the commitments made in relation to Northern Ireland.”

In the likely absence of a deal that meets such a high benchmark, there is no doubt that the EU and the Irish will insist that the backstop provisions remain in place alongside any EU/UK deal. And specifically that the inevitable regulatory divergence that will emerge quickly between the North and the rest of the UK be reflected in customs/regulatory checks in the Irish Sea.

The UK level of ambition is breathtaking, a combination of that TLA wishful thinking and denial that suggests, as bewildered EU officials keep reiterating, that London still does not understand that it cannot behave as if it wishes to continue availing of all the benefits of membership. While leaving.

The row about the “temporary” backstop epitomises that gulf of understanding.