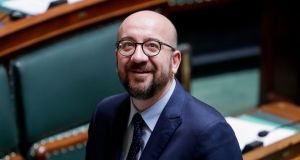 Belgian prime minister Charles Michel. The so-called ‘métis’ children, the product of relationships between settlers and local women, were forcibly taken to Belgium between 1959 and 1962. Photograph: Stephanie Lecocq/EPA

Belgium’s prime minister, Charles Michel, is to apologise on behalf of the state for the kidnapping of mixed-race children torn from their Congolese mothers at the end of the colonial period.

The so-called “métis” children, the product of relationships between settlers and local women, were forcibly taken to Belgium and fostered by Catholic orders, among other institutions, between 1959 and 1962.

The children, born in the 1940s and 1950s, did not automatically receive Belgian nationality and often remained stateless. A majority of the fathers refused to acknowledge paternity of their children.

Two years ago the Catholic Church apologised for its role in the scandal, which affected some 20,000 children in the Belgian Congo, along with Burundi and Rwanda, which were governed by Belgium under mandates from the League of Nations and the UN.

Last year Belgian MPs voted in favour of a resolution calling on the government to help affected children to find their biological parents.

Georges Kamanayo, a former cameraman with the public broadcaster VRT, who was a victim of the policy, told the Belgian newspaper De Standaard that the gesture from the prime minister would be the “ultimate recognition of an injustice”.

“We have felt like a third-rate Belgian for a long time,” he said. “In the colony we were set apart from the white children. It was pure segregation. We tried to immerse ourselves in Belgium, so we wouldn’t stand out.

“In Belgium, we always react a little slower; other countries have been ahead of us,” Mr Kamanayo said.

Belgium’s particularly bloody colonial rule in the Congo continues to be a subject of debate in the country. The Congo Free State was run by King Leopold II as his private domain from 1885 to 1908, who looted the country of its rich resources until he bequeathed it to the Belgian state, under pressure from the international community. Estimates of deaths in that period range from 10 million to 15 million Africans.

The newly named Belgian Congo, which included the whole of the present-day Democratic Republic of the Congo, gained independence from Belgium in 1960.

In February, a UN working group advised in a preliminary report that Belgium apologise for its colonial past, and claimed that the continued discrimination could be attributed to the failure of the country to come to terms with its past.

Mr Michel said in response that he thought the findings, to be published in full in September, were “very strange”.