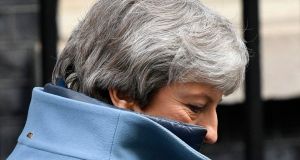 What no one is sure about is whether Theresa May is serious about making a significant compromise. There have been too many false dawns. Or whether Jeremy Corbyn really wants to facilitate her. Photograph: EPA

Theresa May’s strategy had been straightforward. As the clock ran down on the Brexit timetable, she sought increasingly to narrow the options available to MPs to the point where her unacceptable option was left alone to fight it out with an even more, completely unacceptable option.

MPs would then have to pick the best of the worst, faute de mieux.

What has happened instead is that the clock has run out, but all the options have stayed on the table with shrinking time frames. Ratification of a withdrawal agreement, an alternative softer Brexit deal, a no deal, a people’s vote, a general election . . . all remain.

And the danger now, more than ever, is that as time runs out, the default position kicks in – a no-deal Brexit, the least favoured option, not by choice but by accident. The road runs out.

In Brussels, that scenario has come to being grudgingly accepted as the most likely. No one could see a way out of the mess. No deal planning has gone into overdrive and is, the European Commission says, now complete.

But jaded spirits were lifted by May’s promise to reach cross the aisle on Tuesday. If she could be believed.

Here at last is a plausible scenario, a way through even at the last minute, a roadmap to an agreement that both London and Brussels can potentially sign off on. In a manageable time frame.

This is how the wishful thinking goes: May swallows her pride and, jettisoning probably half her party and two of her key red lines – membership of a customs union and engagement in the single market – agrees to back Jeremy Corbyn’s changes to the political declaration on the future framework. If he agrees to endorse the withdrawal agreement.

The result could be a soft Brexit that deals with the backstop issue by making it redundant and could probably secure a majority in the Commons. The 27 can then meet next Thursday and, with little difficulty, approve a negotiating extension to May 22nd.

What no one here is sure about, however, is whether May is serious about making a significant compromise. There have been too many false dawns. Or whether Corbyn really wants to facilitate her.

Labour has been talking up the idea that any deal should be ratified by a “people’s vote” – if he insists on that at his meeting with May, although he is known privately to be a fervent opponent of a second vote, she is likely to block an agreement.

Under her new scenario’s fallback position she would then put both his proposal and her withdrawal agreement to the Commons again, with possibly other options, in the hope that the elusive majority could yet be achieved.

If so, by what Jean-Claude Juncker on Wednesday called a “viable majority”, then the 27 can meet next week and give her an extension to May 22nd.

If not, however, the precipice of a no-deal departure on April 12th would loom large, even though the Commons has declared itself opposed to such a thing in principle.

Yet, in the absence of any positive vote in the Commons, May cannot provide the “justification” that the 27 want even to consider a longer extension. She must be able to show a convincing new route to a clear majority – the prospect of more faffing around, more futile votes, her authority vanished, will simply not convince.

That, despite the reality that there appears among the 27 to be a genuine desire to give the UK a few months to get its act together. Not least to make it clear that the EU is not pushing them out.

Dublin and Berlin have both been making positive noises. Paris is less enthusiastic, and the commission repeatedly emphasises the need for “strong justification”.

In the event that the Corbyn gambit fails and the Commons votes down both their alternatives, perhaps the only way for May to get a guaranteed long extension is to face the so-far unthinkable – a general election.

She has already indicated her willingness to fall on her sword by resigning the leadership. Maybe now the time has come to take her party with her.