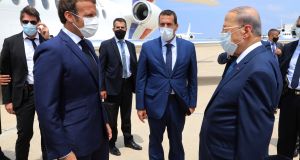 Sixteen employees at Beirut’s port have been detained over the explosion that killed at least 145 people and wounded thousands, according to reports.

All of them are port and customs officials, as well as individuals in charge of maintenance at the hangar where 2,750 tons of explosive materials have been stored for years.

Mr Akiki said that the investigation began shortly after the blast occurred on Tuesday evening and will continue to cover all suspects in the explosion.

It came as French president Emmanuel Macron offered his country’s support for the Lebanese people on Thursday on a visit to Beirut following a huge warehouse blast, but said crisis-hit Lebanon would “continue to sink” unless its leaders carry out reforms.

Lebanon mourned on Thursday the victims of the most powerful blast to hit a country that has already been struck down by an economic crisis, as rescuers searched for those missing since the explosion flattened Beirut port and devastated the city.

Mr Macron was the first foreign leader to visit the Lebanese capital.

France has long sought to support its former colony and has sent emergency aid since the blast, but is worried about endemic corruption and has pressed for reforms as a financial crisis deepened in the Middle East country.

After landing in Beirut, Mr Macron said France’s solidarity with the Lebanese people was unconditional, but said he wanted to tell some “home truths” to political figures.

“Beyond the blast, we know the crisis here is serious, it involves the historic responsibility of leaders in place,” Mr Macron told reporters.

“We can’t do without telling each other some home truths,” he added. “If reforms are not carried out, Lebanon will continue to sink.”

He mentioned reforms of the energy sector, public tenders and the fight against corruption.

Dozens are still missing and up to a quarter of a million people were left without homes fit to live in after shockwaves smashed building facades, threw furniture out into streets and shattered windows several km inland.

A security source said the death toll had reached 145, and officials said the figure was still likely to rise.

Families gathered near the port seeking information on those missing, amid rising public anger at the authorities for allowing a huge quantity of highly explosive material to be stored for years in unsafe conditions in a port warehouse.

“They will scapegoat somebody to defer responsibility,” said Rabee Azar, a 33-year-old construction worker, speaking near the smashed remains of the port’s grain silo, surrounded by other mangled masonry and flattened buildings.

Prime minister Hassan Diab declared three days of mourning from Thursday after the explosion, the most devastating to hit the city still scarred by civil war three decades ago and reeling from a financial meltdown and surge in coronavirus cases.

Economy minister Raoul Nehme said Lebanon, with its banking system in crisis, a collapsing currency and one of the world’s biggest debt burdens, had “very limited” resources to deal with the disaster.

Mr Nehme said damage to the silos had left the country with less than a month’s grain reserves, but claimed there was no risk of food shortage. “There is no bread or flour crisis,” he said. “We have enough inventory and boats on their way to cover the needs of Lebanon on the long term.”

President Michel Aoun blamed the blast on 2,750 tonnes of ammonium nitrate, used in fertilisers and bombs, that had been stored for six years at the port after it was seized. He promised to investigate and hold those responsible to account.

With Lebanon’s capital still smouldering, an emerging paper trail linked the blast to the mammoth stash of ammonium nitrate, which was once described as a “floating bomb” and housed at the port since 2014. As recently as six months ago, officials inspecting the consignment warned that if it was not moved it would “blow up all of Beirut”.

The revelation that government negligence may have played a role in the worst explosion in Beirut’s history fuelled new anger towards Lebanon’s political class among a population already seething at an ongoing financial crisis that has sunk half the country into poverty.

Demonstrators in downtown Beirut attacked the convoy of former Lebanese prime minister Saad Hariri and brawled with his bodyguards in the most overt display of wider anger that is building against Lebanese politicians in the wake of the disaster.

The government said on Wednesday evening it was putting an unspecified number of Beirut port officials under house arrest pending an investigation into how the highly explosive materials came to be stored less than 100 metres from a residential neighbourhoods. The national cabinet also declared a two-week state of emergency, effectively giving the military full powers in the capital.

An official source familiar with preliminary investigations blamed the incident on “inaction and negligence”, saying “nothing was done” to remove hazardous material.

Still unclear was what set off the ammonium nitrate, which requires extreme heat to ignite.

Some local media reported sightings of drones or planes flying in the area shortly before the explosion and some Beirut residents said they saw missiles fired. But officials have denied the incident was the result of any attack.

A Lebanese security source said the initial blaze that sparked the explosion was caused by welding work.

White House Chief of Staff Mark Meadows said the US government had not ruled out the possibility that Tuesday’s explosion was an attack and was still gathering intelligence.

People who felt the explosive force said they had witnessed nothing comparable in years of conflict and upheaval in Beirut, which was devastated by the 1975-1990 civil war and since then has experienced big bomb attacks, unrest and a war with Israel.

“First we heard one sound. Seconds later there was a big explosion. All hell broke loose,” said Ibrahim Zoobi, who works near the port. “I saw people thrown five or six metres.”

He said those in the port district “were burned or charred”.

Seismic tremors from the blast were recorded as far away as Eilat on Israel’s Red Sea coast, about 580 km (360 miles) south of Beirut.

Health officials reported hospitals were running out of beds and equipment to attend to the injured.

Operations have been paralysed at Beirut port, Lebanon’s main route for imports needed to feed a nation of more than 6 million people, forcing ships to be diverted to smaller ports.

The World Bank said it would work with Lebanon’s partners to mobilise public and private financing for reconstruction. It was unclear whether this would affect Lebanon’s difficult negotiations with the International Monetary Fund.

After becoming a byword for destruction and chaos in the 1980s, Beirut rebounded from its 15-year civil war to regain a reputation as a hard-partying playground for the wealthy and theatre for the Middle East’s political intrigues. – Agencies