Nagorno-Karabakh: ‘We will keep our borders and fight with our heart’ 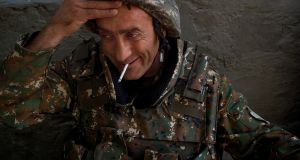 An Armenian soldier smokes a cigarette at the frontline near Aghdam, Nagorno-Karabakh. Photograph: Alex McBride

In Stepanakert, the de facto capital of Nagorno-Karabakh, follow the cigarettes. Passed silently from man to man on street corners, makeshift shelters and hotel lobbies, they are the currency of solidarity. Trade is in cartons rather than single packs.

Throughout this disputed territory a shadow army of volunteers takes them to the frontlines with other provisions such as canned meat and water. Garnis and Ararats are the firm favourites. Melbournes, not so much.

On display at the frontline are posters of a revolver with cigarettes in place of bullets and words that translate as “smoking kills”. No one pays any attention. The click of the lighter has become a brief reprieve from the intensity of life since war erupted with Azerbaijan on September 27th.

The men at Post 127, about halfway along the 200km Line of Contact (LoC) that separates Azeri and Armenian forces, are in the trenches. These brown and grey labyrinths were built during the war in the early 1990s following the fall of the Soviet Union.

A Russian-brokered ceasefire in May 1994 ended the fighting but there was no peace treaty. Nagorno-Karabakh and its surrounded territories, which Armenian forces gained during the war, remained recognised internationally part of Azerbaijan, but became an enclave controlled by ethnic Armenians who enjoy political and military support from Armenia proper. By the end of the 1990s conflict, more than 30,000 people had been killed and over one million displaced.

The trenches have been well-maintained over the past 26 years. Although the Nagorno-Karabakh issue has often been called a frozen conflict, for the people who live in this region it is anything but. Throughout the decades there have been casualties on both sides of the LoC, even outside the four-day war in April 2016 where approximately 200 people were killed. The deep distrust Armenians and Azeris have for each other permeates into many aspects of daily life.

Military service for men is mandatory in Nagorno-Karabakh. Women can sign up voluntarily. Post 127 has a mix of conscripts and volunteers. Experienced soldiers and young men enduring the hardship of war for the first time. They are an eclectic bunch living in a hive of activity.

Vaghe is the youngest at 18. He is a small shy boy who looks to his commander before speaking quietly in mono sentences. The others initially mocked him after he was afraid to spend the night in the trenches during his first few days of service. Now, they say, he is better than any of them, in addition to being a spectacular DJ – upon request the sound of Tones and I’s Dance Monkey wafts through the trenches.

This upbeat attitude is a fortification against the reality only 400m away. Across the narrow mine-studded no man’s land is the Azeri position. The Irish Times visited this part of the front the day after the Russia-brokered October 17th ceasefire was supposed to be implemented, and throughout our time on the ground, artillery fire could be heard.

Nver, a 35-year-old volunteer from Yerevan, had little faith the truce would hold: “There was a ceasefire, but they didn’t keep the ceasefire. It’s the second ceasefire they broke, they want to continue their war,” he said. Both sides have accused the other of violating last Saturday’s agreement.

Understanding the concept of homeland is one of the keys to understanding this conflict. Nagorno-Karabakh has a majestic beauty. The rugged mountains punch the sky and valleys pour out onto vast landscapes. The air is clean and crisp. There is magic here.

The Armenians won’t give this land up easily and the Azeris who were displaced in the 1990s won’t stop trying to come back. On the front it’s too early to talk about compromise or debate the prospect of Azeris and Armenians living on this land together like they did in the past. Both sides want peace, but the ways they envision it are almost polar opposites.

Turkey’s involvement in this most recent escalation has injected a new fear into many Armenians, whose thoughts flash to the mass murder and expulsion of 1.5 million Armenians by Turkey in the early 1900s. The thinking in Nagorno-Karabakh is: If we don’t fight, Stepanakert will fall first and Yerevan, the capital of Armenia, will be second.

Since September 27th, the face of war between Azerbaijan and Armenia has changed. The Armenians are dug into trenches and reliant on a familiar arsenal of military hardware. The Azeris have been supplied with drones from Turkey and Israel, which have inflicted heavy losses. It’s possible to shoot them down but they are often too high or too small.

In the south of Nagorno-Karabakh, the fighting has been intense. Pictures seen by The Irish Times show fresh shallow trenches manned with young men who have come under heavy fire all week. The Azeri and Armenian positions are constantly changing but it’s clear the Armenians have lost important ground.

This week, the Lachin corridor, the main supply route from Nagorno-Karabakh to Armenia, has come within range of Azeri artillery, though an official source in Stepanakert told The Irish Times there was no risk of Nagorno-Karabakh being encircled due to the Armenians’ control of the higher ground.

“We feel a little sad because our boys are dying in the south and we can hold the position here,” one soldier at Post 127 said. “I’ve asked to go down, but I’ve been told no.”

In Stepanakert, old men gather at the hotel lobbies dressed in their military fatigues ready to defend their homeland at a moment’s notice. They have done it once; they’ll do it again they say. But for now, even if they can do no more than organise the movement of cigarettes to the men in the trenches, that’s enough for them – leaving Nagorno-Karabakh is not an option.