French teacher’s killer ‘was in contact with jihadist in Syria’

Seven people, including two schoolchildren, have been charged over Samuel Paty’s death 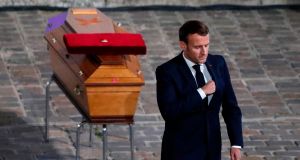 The killer of Samuel Paty, the teacher decapitated outside his school in a Parisian suburb last week after showing his class two cartoons of the prophet Muhammad, was in contact with an Islamist fighter in Syria, French media has reported.

France’s anti-terrorism prosecutor confirmed on Thursday that seven people, including two schoolchildren, had been charged with terrorism offences after Abdullakh Anzorov (18) killed the teacher with a 30cm knife on Friday.

Mr Paty (47) was posthumously awarded the Légion d’honneur, France’s highest honour, at a ceremony at the Sorbonne University in Paris on Wednesday. Paying tribute to the teacher, French president Emmanuel Macron said France owed it to a “quiet hero . . . to continue his fight for liberty and for reason”.

Le Parisien newspaper reported that Anzorov had contact with an as yet unidentified Russian-speaking jihadist in Syria who was located through an IP address that had been traced back to Idlib, a jihadist holdout in northwestern Syria.

FranceInfoTV said the killer, who arrived in France aged six with his Chechen parents and had been granted asylum and a residence permit until 2030, had first established contact with the jihadist in September this year via Instagram.

In an audio message in Russian, Anzorov said after the killing that he had “avenged the prophet”, whom Mr Paty had portrayed “in an insulting way”. Amid references to the Koran and Islamic State, he added: “Brothers, pray that Allah accepts me as a martyr.”

The message, obtained and translated by Agence France-Presse, was published in a video along with two tweets, one showing the victim’s severed head and another in which Anzorov confessed to the murder. Soon after the killing, he was shot to death by police.

Among six people charged on Wednesday night with complicity in a terrorist murder were two pupils, aged 14 and 15, part of a group who accepted €300 or €350 from the killer to identify the teacher, the prosecutor, Jean-François Ricard, said.

Two friends of Anzorov aged 18 and 19 were charged with the same offence, one after allegedly driving him to the school in Conflans-Sainte-Honorine, 30km northwest of Paris, and the other after helping him buy weapons. A third faces lesser charges.

Also charged with complicity in a terrorist murder are Brahim C, the father of one of Mr Paty’s pupils, who started a social media campaign against the teacher even though his daughter was not in the lesson concerned, and an Islamist radical named as Abdelhakim Sefrioui who also stoked online outrage on Facebook and YouTube.

Mr Ricard said there was “a direct link of causality” between Brahim C and Mr Sefrioui’s actions and the murder. There was evidence the killer had been “directly inspired” by some of their social media posts, verbatim notes of which were found on his phone, Mr Ricard said.

Mr Paty showed the class the images of Muhammad alongside other caricatures and cartoons of different subjects as part of a discussion on free speech, after asking any pupils who feared they might be offended by them to look away if they wanted.

The caricatures were part of a series published by the magazine Charlie Hebdo that led to a deadly assault on its offices five years ago in which 12 people were killed.

Mr Paty’s murder has shocked France and prompted a crackdown on Islamic extremism. Police have raided dozens of premises of suspected extremists and Islamist groups. A mosque near Paris is also to close for six months. – Guardian