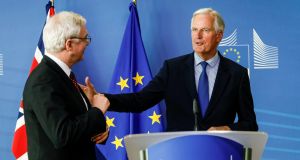 No cherrypicking: Michel Barnier, chief negotiator for the European Union, was clear in his message to the UK’s David Davis. Photograph: Dario Pignatelli/Bloomberg

There will be no agreement on a transition regime for the UK after Brexit unless it commits itself to fully respect the EU’s legal order and its regulatory and supervisory systems, the EU chief negotiator Michel Barnier has warned.

The message was clear: no cherrypicking. It was a response to comments by his counterpart in the UK this weekend, David Davis, who talked in vague terms about the possibility of “regulatory divergence” during transition.

Mr Barnier, who spent the day briefing the European Parliament and EU27 European affairs ministers on the prospects for this week’s fourth round of talks, was again insistent that there could be no progress in talks on transition, or on the future relationship, until real progress is made on the three priority “divorce” issues of citizens’ rights, Ireland and the Brexit bill.

At the ministerial meeting he received strong support from all 27.

There would not be any “mixing” of the discussions on the financial settlement with discussions of future relationships, he told journalists, a firm rebuff of a key thrust of prime minister Theresa May’s Florence speech last Friday, which sought to link the Brexit bill to an agreement on a two-year transition.

Mr Davis, UK minister for Brexit, on Monday reiterated to journalists in Brussels Ms May’s important Florence pledge that “the UK will honour commitments we have made during the period of our membership”. But he added a rider, suggesting the UK is still determined to open the “future relationship” talks now – “it’s obvious that reaching a conclusion on this issue can only be done in the context of and in accordance with our new deep and special partnership with the EU”.

Mr Barnier’s analysis of the Florence speech – “constructive” but needing to be translated into specifics for the negotiations – was echoed by Minister for European Affairs Helen McEntee on Ms May’s comments on Northern Ireland. These, she told ministers, had reiterated commitments already made to preserving the Belfast Agreement, the Common Travel Area, and a frictionless Border, without explaining how this would be done.

Ireland’s predicament was repeatedly referred to sympathetically by ministers, with the Swedes making a particularly strong intervention in support .

Mr Davis acknowledged that the week would be one for detailed technical work: “On Northern Ireland and Ireland we made good progress at the last round, as you said, with a common desire to maintain the Common Travel Area and protect the Good Friday Agreement. This week will now be about crunching through the technical detail of how we, together, make that happen.”

But he was no more forthcoming on specifics – it is not clear, for example, if the UK “audit” of what are said to be 150 cross-Border programmes and institutions, is yet ready for the negotiators.

Summing up, Estonia’s minister for European affairs Matti Maasikas, who chaired the ministers’ meeting said that “the mandate we adopted four months ago remains fully valid, and ministers have again shown their full support for the EU negotiator. The EU 27 remain united and we have a single channel of negotiations.”