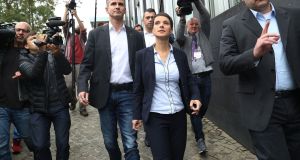 Frauke Petry, a leading member of the right-wing Alternative for Germany (AfD), who is leaving the party. Photograph: Sean Gallup/Getty Images

Germany’s far-right Alternative für Deutschland (AfD) holds its first Bundestag parliamentary party meeting this morning and, in a nod to Brendan Behan, the first item on the agenda is the split.

AfD officials have ordered leader Frauke Petry to leave the party after she walked out of a press conference on Monday in protest at its extremist rhetoric. The drama clouded the party’s 12.6 per cent result in Sunday’s federal election, which saw it win 93 seats as third-largest party in the next Bundestag.

That cloud will continue to hang over today’s first postelection gathering, with questions growing over the party’s long-term cohesion.

On Monday morning Ms Petry, was was just elected for Saxony, announced she would sit as an independent outside the AfD parliamentary party because of language “not perceived as constructive by the party’s conservative voters”.

The target of her criticism: campaign coleader Alexander Gauland, part of the party’s nationalist wing, who promised on Sunday his party would “pursue” Chancellor Angela Merkel in the Bundestag.

On Monday Mr Gauland (76) questioned a pillar of postwar Germany’s political identity: its support for Israel.

AfD leaders insisted Ms Petry’s walk-out would not split the party and demanded she leave “to not cause any further damage”.

The 42-year-old has a strong power base in her native Saxony and, on Monday afternoon, the parliamentary party in northeastern Mecklenburg-Vorpommern announced it was splitting.

The AfD surge saw Dr Merkel’s Christian Democratic Union (CDU) slump more than eight points to 33 per cent in the election, under pressure over its handling of the refugee crisis, which saw more than a million people seek asylum in Germany.

Sunday’s result is likely to force Dr Merkel into an untested, three-way coalition with the Greens and liberal Free Democratic Party (FDP).

Such an alliance bodes ill for French president Emmanuel Macron’s hopes of reforming the euro zone, details of which he will present in a speech on Tuesday at the Sorbonne.

FDP leader Christian Lindner said on Monday his party would oppose “new pots of money for automatic transfers” in the euro area.

When asked on Monday about Mr Macron’s reform speech, Dr Merkel said she would not draw “red lines” but would support “what makes sense”.

“We can do with more Europe, but it needs to lead to more competitiveness, more jobs, more clout for the European Union, ” she said.

Her party is cool on Mr Macron’s proposals, only backing a European version of the International Monetary Fund.