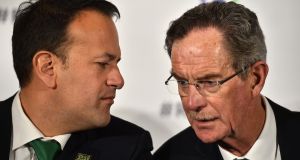 The Irish delegation had made their pitch for the 2023 Rugby World Cup and by all accounts, it had gone very well. So as they sat on the podium in a London hotel basement to address the media, why did they look so miserable?

The press conference had begun cheerfully with a rousing, fast-paced video featuring everyone from James Joyce and John F Kennedy to Mary Robinson, Bono and Sinead O’Connor.

Narrated by women’s rugby captain Niamh Briggs, it presented Ireland as a boisterous, joyous nation, rooted in its past but ready for the future and plugged into a vast, global diaspora.

Then came a second video, which they had shown the World Rugby committee at the start of the presentation, and this was in every sense a darker affair. Shot in black and white, it showed a white-haired Bob Geldof emerging from the darkness, looking like King Lear on the blasted heath.

“I will arise and go now and go to Innisfree,” he intoned, before moving awkwardly from the Yeats poem to the Irish diaspora, who could become a “global stadium” for the tournament in 2023.

“Seventy million, ready for the world, ready to arrive,” he said sadly, as if they were all coming home for a funeral.

On the podium, Dick Spring had the face of a man who had heard the most terrible news, Brian O’Driscoll seemed stunned and Shane Ross looked cross beyond words, as if he had just spotted a brace of High Court judges trespassing on his land.

In the middle sat Leo Varadkar, a picture of contentment as he picked jelly beans from a small jar in front of him, smiling gently as he chewed. The Taoiseach nodded benignly when Spring told him how “extremely gratified” he was by his presence in London.

“I wouldn’t have missed today for anything” he said with magnanimity.

The Taoiseach’s presence may indeed have given Ireland an edge, particularly in view of Emmanuel Macron’s refusal even to make a video to endorse the French bid. Instead, France brought along Jonah Lomu’s sons Dhyreille and Braylee, each perched precariously on a giant knee of Sebastian Chabal during the French press conference.

South Africa’s vice-president, Cyril Ramaphosa, spoke about the role rugby played in uniting the country after the end of apartheid, a theme taken up in a stylish video.

During their presentation, Ireland’s delegation faced questions about infrastructure, Brexit and how much scope there was for corporate responsibility.

The IRFU’s Philip Browne presented a blizzard of statistics to show that Ireland could comfortably cope with almost half a million extra visitors.

The delegation also promised to guarantee that hotel prices would not surge during the tournament, as they do now during rugby weekends in Dublin.

Among the strongest arguments for Ireland’s bid is the promise of greater exposure in the United States, a key emerging market for rugby, through the Irish diaspora. Another is that the Government has underwritten the full cost of staging the tournament, confident that the bet will pay off in extra revenue through VAT and excise duties.

“It’s not money that could be spent on other things this year or next year. It’s a future liability,” the Taoiseach added.

Afterwards, he told French television he still played rugby with the Oireachtas team (“I’m never any good but I do play”) and expressed cautious optimism about the Irish bid.

“I’m confident, but like everything, it comes down to votes,” he said.

The French video featured a dressing room pep talk to a team of national characters, including a gendarme, a cheese maker and a Moulin Rouge dancer. It identifies among the intrinsically French qualities that of sang froid, but the Taoiseach appeared to be on a mission in London to show it was something the Irish could bring off too – in his case, with added froideur.

1 Seán O’Brien: Anger over my parents’ break-up never left me
2 Plenty of positives for Farrell as Ireland hit the ground running
3 Madness or defiance? The GAA is taking a huge gamble in staging Championships
4 All in the Game: Klopp’s Amsterdam subs don’t go down well
5 Will Connors chops his way to the front of Ireland’s openside queue
Real news has value SUBSCRIBE