Merkel headed for fourth term with her worst result yet

Germans have turned away from chancellor, her centrist CDU and her open-door policy 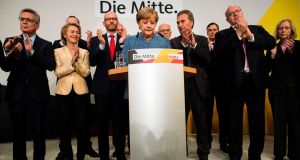 When a beaming Chancellor Angela Merkel appeared before her whooping supporters on Sunday evening, they seemed to be cheering a different election result to everyone else.

Germany’s three-term leader appears headed for a fourth, amid uncertainty over her future coalition partner. According to initial forecasts, the German leader scored her worst-ever result and one of the weakest results ever for her party, the Christian Democratic Union.

Angela Merkel was smiling, but her eyes were not.

“I am delighted we reached our strategic goal as strongest political force, against whom no government can be formed,” she said. “We have a mandate to take on responsibility to rule.”

But Germans voted with their feet on Sunday: away from the German leader, her centrist CDU, her 2015 open-door refugee policy and her decision to ignore the far-right Alternative für Deutschland (AfD) in the hope they would go away.

They didn’t and now she has to grapple with a populist party to the right of her CDU, shattering a postwar parliamentary taboo and a golden rule of conservative politics. On Sunday evening she bridled against the idea that she has only one realistic – and untested – coalition option to stay in power.

Her junior coalition partner, the Social Democratic Party (SPD) is slinking into opposition with a historic disaster of a result of around 20 per cent. Her only other option is a three-way alliance with the revived liberal Free Democrats (FDP) and the Green Party.

Squaring the latter’s ecological demands with the former’s pro-business policies will be a challenge in coalition talks. The FDP is likely to sell its co-operation for a very high price, after its last cohabitation with Dr Merkel ended with it ejected from the Bundestag in 2013.

This time around, FDP leaders can head into coalition talks having pulled in more than a million former CDU voters.

“The vote for the FDP was a vote for a change of political direction,” said party leader Christian Lindner.

In a taste of things to come in coalition talks, and perhaps the years to come, he sparred on live television with Green Party leader Katrin Göring-Eckardt.The Greens say their price for power is a coalition that takes seriously climate issues, prompting the FDP leader to dismiss a “market-friendly climate protection, not ideological, subvention-driven protection”.

Adding to Dr Merkel’s coalition difficulties is her furious allies in Bavaria: the Christian Social Union (CSU). On the front lines of the refugee crisis in 2015, CSU leader Horst Seehofer demanded a tougher line from the centrist chancellor. She refused to impose immigration limits, and only belatedly imposed border controls. On Sunday Mr Seehofer said voters had taught the CDU/CSU a lesson.

“We made a mistake and left our right flank open, something used by our competitors,” he said. “We have a vacuum on the right and we have to close that.”

Over at SPD headquarters, with red-rimmed eyes, SPD leader Martin Schulz looked tired when he appeared before supporters. They cheered him like a winner as he stood before his now redundant election poster, “It’s Time”. Mr Schulz wasted no time trying to sugar-coat what he admitted was a “bitter” election pill.

After admitting his party was heading out of opposition with 20 per cent, he promised to renew the party’s social justice profile. And, in the hope he can stay on as SPD leader, he quickly switched tone to opposition leader.

“The voters have given us a mandate and that is opposition,” he said, his voice quavering with emotion as he attacked Dr Merkel’s “cotton wool, sleeping pill political style that has carried people into the arms of the far-right”.

The AfD’s entry to the Bundestag, he said, was a “bitter day for democracy.”

With six parties in the next Bundestag, the most crowded since the 1950s, the rules of German parliamentary democracy are set to be rewritten with the AfD.

It pulled in votes from all over the map of Germany – and the political landscape. It reactivated a million nonvoters, furious with Berlin’s political class, and it won over more than a million CDU voters tired of the 12-year Merkel era. Its most dramatic gains were in eastern states, where support rose to more than 20 per cent in some regions, with the four year-old party now outflanking the 150-year-old SPD.

AfD coleader Alexander Gauland warned established parties in Germany that they should “dress up warm” for the next four years, and particularly the chancellor: “We will hunt Angela Merkel.”

AfD leaders, under a hail of criticism, promised to bring debate and plurality of opinion back to the parliament.

But as night fell, and the AfD celebrated its arrival in the Bundestag in an eastern Berlin disco, hundreds of demonstrators gathered outside. Braving torrential rain, they shouted “Nazis out” and carried banners with slogans such as “Racism is no alternative”.

As police in riot gear showed up to pen in protesters, AfD supporters on the balcony above filmed events on their phones, drinking sparkling white wine to mark a historic day.