Pham Tra My (26) texted: ‘I am really sorry, mum and dad, my trip to a foreign land failed’ 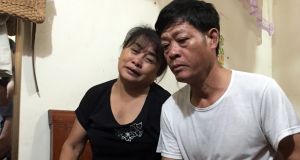 Pham Van Thin (right) and Nguyen Thi Phong (left), father and mother of Pham Thi Tra My, who is believed to be among the 39 people found dead in a container truck in southeastern England, are seen in their home in Vietnam. Photograph: EPA

The family of a young Vietnamese woman thought to be among the 39 migrants found dead in a lorry in Essex said she dismissed their pleas not to travel.

Pham Tra My (26) has not been in contact with her family since sending a final text message home on Tuesday saying she could not breathe.

Police later found the bodies of eight women and 31 men in the refrigerated trailer of a lorry on an industrial estate in Grays, Essex, in the early hours of Wednesday.

Relatives of Ms Tra My told the BBC they have not been able to contact her since she sent a text on Tuesday night saying she was suffocating.

“I am really, really sorry, Mum and Dad, my trip to a foreign land has failed,” she wrote.

“I am dying, I can’t breathe. I love you very much Mum and Dad. I am sorry, Mother.”

Ms Tra My is reported to have paid a charge of about £30,000 to people smugglers in order to be brought into the UK illegally.

Her father, Pham Van Thin, told Sky News: “We tried to talk her out of it because it would be a very difficult journey for her as a girl.

“But she said: ‘If I don’t go, the family would stay in a very difficult situation because of the big debt’.

“So she took a risk and decided to go, and we had to agree.”

He added: “We all have been in shock. I cannot explain our pain and devastating feeling. We were all very devastated and sad.”

He told CNN that smugglers said the crossing was “a safe route” and that people would go by aeroplane or car.

“If I had known she would go by this route, I would not have let her go,” the father said.

All of the victims have since been moved from the vehicle in Tilbury Docks to Broomfield Hospital in Chelmsford for post-mortem examinations to be carried out.

Essex Police are now working on the largest mass fatality victim identification process in its history, having previously said all were from China.

Investigators will look at tattoos, scars and belongings, including jewellery and clothing, with each of the victims said to have had some kind of bag.

More than 500 exhibits have been collected, including mobile phones, which will be downloaded and interrogated for any messages that could give clues to the identity of the victims or how they came to be in the back of the trailer.

Detectives are investigating a “wider conspiracy” after claims surfaced that the lorry could have been part of a convoy of three carrying around 100 people.

The mother and a sister of 19-year-old Bui Thi Nhung set up an altar in the village of Yen Thanh in north-central Vietnam after a family friend in the UK told them she had died after paying thousands of pounds in the hope of finding work in a nail bar.

The Vietnamese Embassy in London has started a hotline while the ambassador to the UK, Tran Ngoc An, spoke to Home Secretary Priti Patel on Friday night before meeting investigators from the National Crime Agency and Essex Police.

Lorry driver Robinson is expected to appear before magistrates in Chelmsford on Monday.

Three other people arrested over the deaths remain in custody while a man wanted in connection with the investigation was arrested at Dublin port on Saturday. In Belgium, police are hunting the driver who delivered the trailer to Zeebrugge, the port it left before arriving in the UK.

It is not yet known when the victims entered the trailer, where temperatures can be as low as minus 25 degrees if the fridge is activated, or the exact route it travelled.

Speaking on the BBC’s Andrew Marr Show, she added: “You cannot stop international people tracking gangs, if people trafficking is what this is, you can’t stop them without working internationally.

“Yes, we can try and make our east coast ports more secure, but you have to have more international co-operation.” - PA