Tests had identified an additional 4,200 cases with half showing no symptoms 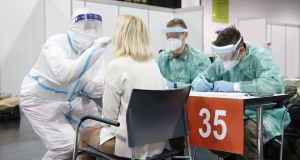 Vienna denies the push has been a failure, but weak participation so far mirrors growing doubt in the population towards a looming vaccination programme.

Out of a population of 8.8 million people, about two million have been tested to date – with the participation rate dropping as low as 14 per cent in the capital.

A month ago chancellor Sebastian Kurz unveiled the programme, a nod to a similar scheme in neighbouring Slovakia using fast PCR tests, as the best way to have “as safe a Christmas as possible”.

Austria’s health minister Rudolf Anschober insists the programme will be successful in the long run, with a second testing push to start in the new year.

“In the future, we want to reach groups that have not yet responded positively to the tests,” said Mr Anschober. He said the tests had identified an additional 4,200 cases among people – an infection rate of 0.21 per cent – with half showing no symptoms.

“Without testing,” he added, “these positive cases would have unknowingly infected other people.”

The Austrian Red Cross, which is involved in the testing programme, said that two million tests in a month was an impressive result “viewed against the 3.5 million tests we carried out previously, going back to March”.

Faced with images of empty testing centres, however, and a participation rate far below the 60 per cent goal, Austria may offer incentives for those who show up for a test in the new year.

The populist Freedom Party (FPÖ) caused uproar in parliament for claiming the tests were expensive and worthless. One of its MPs dropped cola into the antigen kit used and, minutes later, waved triumphantly from the speaker’s podium a positive test result.

The manufacturer of the test was not amused, saying he had left out a crucial test step; if the MP used the same approach to a pregnancy test, the company said, he would now be expecting a baby.

The FPÖ stunt went down a storm on social media, with even Germany’s far-right Alternative für Deutschland claiming quick tests were a waste of taxpayers’ money.

With nearly one million doses of Covid-19 vaccine on order for the first three months of 2021, just 22 per cent of Austrians say they will definitely have the jab. That is down from half just a month ago, with 27 per cent saying they are “likely” to be vaccinated, according to a representative Gallup survey.

Dr Bernhard Kittel, a sociologist at the University of Vienna, said studies show a link between readiness to be tested and vaccinated with satisfaction in the government.

Opposition Social Democrats have pounced on this reading, describing the low test take-up as a sign “the population has lost confidence in the government’s crisis management due to . . . chaos, poor preparation and poor and contradicting communication”.