China worst offender in record year for jailing of journalists

At least 247 imprisoned worldwide as of December, according to CPJ survey 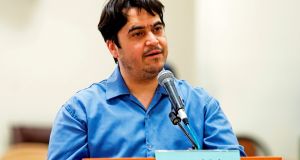 Ruhollah Zam, a former opposition figure and journalist who had lived in exile in France, speaks during his trial at Iran’s Revolutionary Court in Tehran in June. He was executed last week. Photograph: Ali Shirband/Mizan News Agency/AFP via Getty Images

China is the country that jailed the most journalists for the second year in a row, according to an annual survey by the Committee to Protect Journalists (CPJ).

The survey also found that 2020 was a record year for the number of journalists imprisoned globally.

As of December 1st, at least 247 journalists were behind bars in relation to their work, according to the CPJ survey. This figure does not include those who had been arrested and released, paroled, or assaulted in the course of performing their duties.

China jailed at least 47 journalists in 2020, 10 more than in Turkey, where journalists continue to be sent to prison despite a fall in numbers since the 2016 attempted coup.

Journalists were also targeted in Belarus, with dozens arrested, including at least 10 still in jail on December 1st, the first time jailed journalists have been recorded there in the CPJ survey since 2014. At least seven were jailed in Ethiopia, mostly accused of anti-state crimes. Fifteen journalists were in jail in Iran, where on December 12th, Ruhollah Zam was executed, having faced 17 charges including espionage and spreading false news abroad.

Among the journalists jailed in China, several are serving long sentences or are being held without charge. Some have not been heard from in some time, or are known to be held in horrific conditions, including those arrested for reporting on the Wuhan lockdown. Many are accused of espionage.

“It’s shocking and appalling that we are seeing a record number of journalists imprisoned in the midst of a global pandemic,” CPJ executive director Joel Simon said in a statement.

There was also an alarming crackdown on journalists in the US this year during widespread protests. According to the US Press Freedom Tracker, 110 journalists were arrested or charged, and about 300 assaulted – the majority by law enforcement.

Matthew Rodier, a freelance journalist who covered the Hong Kong protests and the Black Lives Matter rallies in Washington DC, said violence against journalists in Hong Kong was largely driven by a government with a poor history towards the media.

“I never thought that type of situation would arise in America so violence specifically directed at journalists here was more surprising, but not unheard of,” he told the Guardian.

“Rightly or wrongly we have always been seen as a beacon of press freedom.”

The CPJ also singled out Donald Trump and his “fake news rhetoric” for criticism, and said a lack of global leadership on democratic values was perpetuating a crisis in media freedoms. It urged Joe Biden to ensure accountability for attacks on press.

The report found that two-thirds of jailed journalists were charged with anti-state crimes, but no charges had been disclosed in 19 per cent of cases, mostly in Eritrea and Saudi Arabia. – Guardian/Reuters