World Food Programme warns that Yemen could face famine in 2021 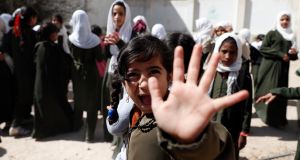 A girl reacts as she waits to get a school bag provided by a local aid group, Mona Relief Yemen, at a public school in Sana’a, Yemen. Mona Relief Yemen has distributed school bags to encourage girls to keep attending classes as the number of out-of-school children is estimated at more than two million. Photograph: EPA/YAHYA ARHAB

Yemen is the country most at risk of humanitarian catastrophe in the coming year, according to a report by the International Rescue Committee (IRC).

The region’s poorest country topped the IRC annual emergency watchlist for the third year in a row due to “five years of war and severe underfunding [of aid] that has pushed the country to new lows in 2020”.

Five years after Saudi Arabia and the Emirates, two of the region’s richest countries, intervened in the civil conflict between rebel Houthis and the Riyadh-backed government, “the conflict remains intense and the humanitarian response is on the brink of collapse”, said the IRC, the largest international agency operating in Yemen.

Despite UN efforts to impose ceasefires and resume negotiations, “there is no sign of a political resolution to the crisis. Meanwhile, the Covid-19 pandemic and a steep drop in humanitarian funding put the country at risk of massive further deterioration”.

The committee points out that “the World Food Programme has warned that Yemen could face famine in 2021”.

Some 24 million of Yemen’s population of 30 million are in need of food, protection or medical care.

IRC nutrition co-ordinator Abeer Fawzi said that Yemenis fear hunger more than coronavirus. “Women and girls are likely to be disproportionately affected, given Yemen scores worst in the world for women’s wellbeing,” she says. Some 200,000 pregnant women are undernourished while women and girls suffer abuse.

Ms Fawzi adds: “At the end of 2020, malnutrition for children under 5 was the highest ever recorded, yet, in the face of an unprecedented threat, the world has turned its back on Yemen.”

‘No future and no hope’

IRC director Tamuna Sabadze urges “more commitment than we see today” from domestic, regional and international actors to end the war. “Without this, things will not change in Yemen; the ordinary civilians of Yemen will really have no future and no hope,” she told al-Jazeera.

Saudi-supported pro-government forces continue to battle the Houthis for control of strategic territory and oil fields while southern secessionist allies of the Emirates, which has abandoned the fight against the Houthis, intermittently clash with pro-government troops.

Germany, the Netherlands and Norway have begun to limit arms sales to Saudi Arabia but its war effort remains sustained by $31 billion in weapons transfers, with the US, Britain, Spain and Canada topping the list of suppliers. US president-elect Joe Biden has pledged to suspend sales to Riyadh.

After years of understating fatalities in the Yemen war, the UN has updated the figure to 230,000, including a large proportion of civilians due to aerial bombing. Forty per cent of strikes target residential areas, in violation of international law.