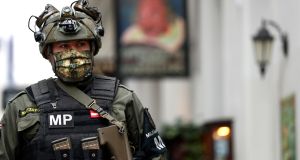 Austria’s anti-terror agency ignored warnings from Slovakia that the 20-year-old gunman behind Monday’s shooting incident in Vienna in which four people were killed attempted to buy ammunition in Bratislava.

Fejzulai, a dual citizen of Austria and North Macedonia, was refused the purchase as he was not a registered gun owner.

“But in later steps something clearly went wrong in the communication,” said Mr Nehammer, announcing an inquiry into the operations of the Austrian anti-terrorism agency.

On Monday at 8pm local time, wielding an AK-47 assault rifle, Fejzulai shot to death two men and two women as he ran through an area of the Austrian capital near Schwedenplatz. Some 23 others were injured, including seven seriously.

Special forces shot and killed Fejzulai about nine minutes into the attack. Since then 16 people have been arrested after raids in Austria and Switzerland, including friends the gunman met hours before the attack.

At a press conference on Wednesday, Mr Nehammer said police now believed the gunman had acted alone in the attack.

After viewing thousands of smartphone videos of the attack, provided by members of the public, Mr Nehammer said the footage showed “the kind of brutality and cruelty that drove the perpetrator”.

A second failure, he said, related to Austria’s state-financed “deradicalisation” programme, of which Fejzulai was a participant.

While serving a 22-month sentence for attempting to join Islamic State in Syria, the man convinced his mentors under the programme that he had turned against jihadism and other radical Islamist ideas.

As a result he secured an early release last December, Mr Nehammer said, “all the while focused on destroying the system”.

“The perpetrator took advantage of the system in a perfidious manner,” said the interior minister. “He appears to have fooled all those who acted to the best of their knowledge and secured an early release.”

The Derad deradicalisation organisation, which holds bimonthly meetings with programme participants, took issue with the interior minister’s claim that it had declared Fejzulai to be not a threat.

“Until a deradicalisation programme is stopped completely, there is always an element of risk,” said Moussa Al-Hassan Diaw, director of Derad.

Chancellor Sebastian Kurz said the attack has “shattered” illusions that Austria was safe from the kind of Islamist violence that has rocked its neighbours. It has also drawn attention to the country’s growing problem with homegrown radicalisation.

In recent years some 250 men from Austria, a country of 8.5 million people, have travelled to join Islamic State, also known as Isis, in Syria. By comparison, Germany, with 10 times as many people, has just four times as many travellers to Syria.

The gunman’s lawyer described him as a young man who was unsure of his place in Austrian society.

“He gave me the impression of a young man who was searching,” said Nikolaus Rast to the Bild tabloid. “It didn’t work out with a traineeship and [he] was a sitting duck for certain [extremist] groups.”