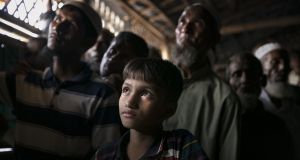 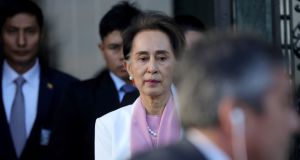 In a brief appearance before the closing session of the UN court hearing allegations of genocide against Myanmar, Aung San Suu Kyi has issued a final appeal to judges to reject those charges and avoid any action that could “hinder reconciliation” between the country’s ethnic communities.

After three days of evidence alleging mass killing, rape, and forced expulsion during “clearance operations” by Myanmar’s military in 2017, the Nobel laureate chose to end the case by showing the court a picture of a football tournament which she claimed illustrated that reconciliation in action.

The picture was taken in Rakhine, the state at the heart of the 2017 conflict, she said, and the players and the spectators were from mixed local communities now rebuilding after the violence – from which, the UN says, some 750,000 Rohingya Muslims fled into neighbouring Bangladesh.

“Ours is a country of great diversity, facing great challenges”, said Ms Suu Kyi (74), Myanmar’s civilian leader since 2016, whose former reputation as a champion of democracy has been destroyed by her support for its military campaign against the Rohingya.

“We are attempting in difficult circumstances to build unity out of that diversity and to develop the potential of all our people. I would ask you not to take any steps that could generate suspicion or undermine that reconciliation.”

For that reason, she told the 17 judges of the International Court of Justice (ICJ), she was asking for the case brought by The Gambia, alleging genocide by Myanmar’s military in Rakhine in 2017, to be dismissed.

“Myanmar requests the court to remove the case from its list”, she said.

Ms Suu Kyi did not respond to scathing criticism earlier in the day from counsel for The Gambia, Prof Philippe Sands QC, who raised the allegedly systematic use by the military of sexual violence against women, and noted that she had not denied it in her initial address on Wednesday.

Under ICJ protocol, the “agent” on each side is the delegation leader, and Prof Sands – in the only comment of the proceedings addressed directly to Ms Suu Kyi – observed: “Not one word about the women and girls of Myanmar who have been subjected to these awful serial violations. Madame Agent, your silence said far more than your words.”

Prof Sands also challenged the contention by Aung San Suu Kyi on Wednesday that “genocidal intent” was not the only explanation for the “clearance operations” in Rakhine, which she claimed were intended to expel armed “terrorists” of the Arakan Rohingya Salvation Army.

While it was true, he said, that some of the charges against Myanmar, such as rape and mass killing, did constitute genocide, and others, such as forced displacement, arguably constituted crimes against humanity, the important point was that “the assessment of genocide is not zero-sum game”.

Myanmar, as a signatory to the 1948 Genocide Convention, had a duty to prevent genocide, and that obligation began “the instant” it realised there was a serious risk. Expert UN reports had “amply identified that serious risk”.

Entire Rohingya villages had been destroyed, he said. However, the intent to destroy even part of a group was sufficient for the charge of genocide to be proved. “Genocide is never a single act. It is a continuum. One thing leads to another”.

The Gambia has asked the court for “emergency measures” to ensure there are no further “genocidal activities” targeting the Rohingya, no destruction of evidence, and that Myanmar co-operates with UN investigators.

The presiding judge said the court’s decision would be handed down “as soon as possible”. That is widely expected to be in January.