‘Saving lives is not a crime,’ says NGO worker, who helps African migrants in trouble at sea 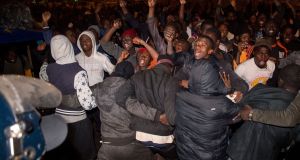 On Christmas Day, Helena Maleno posted the following on her Facebook page: “Twenty-eight people are lost in the Alborán area and seven have made an emergency call from the Gibraltar Strait.”

The people she was referring to were migrants who had got into difficulty trying to cross the sea from Morocco to Spain. Maleno is a Spanish journalist and charity worker based in the northern Moroccan city of Tangier whose NGO, Walking Borders, is dedicated to helping migrants.

For the past decade, many of them have told Maleno of their travel plans and noted down her phone number before they set off for Spain. If they got into trouble while at sea they would call her and she in turn would inform Salvamento Marítimo, the government agency that carries out sea rescues. Last year she issued hundreds of detailed alerts, each time warning that small boats often packed full of people had lost their way or were in danger of capsizing in the Mediterranean.

This has made Maleno (47) a saviour for many migrants, but the Moroccan authorities view her with suspicion and claim she could be part of the problem. On Wednesday she will appear in court in Tangier to face accusations that she is profiting from the migrants’ crossings and is essentially a people trafficker.

The hearing was originally set for December 27th, but was postponed after she requested more time to prepare her defence.

“I am calm,” she said outside the courthouse that day. “I know that saving lives is not a crime.”

The criminal investigation began in Maleno’s own country. In 2012 the Spanish police looked into her activities to find out if they included abetting illegal migration. In April last year the Spanish high court shelved the case against her. But the Moroccan police, which works closely with Spain on controlling migration, continued to probe, leading to this week’s court hearing.

“My phones have been tapped for several years,” Maleno wrote on Twitter in December, adding that the Moroccan police had appeared to dismiss the case against her in 2015.

“Both police forces acknowledge that I have never profited at any time despite being accused of being a trafficker. What would the logic be, then, behind my supposedly criminal motivation to help save lives?”

The Moroccan authorities’ answer to that is unclear. The court documents, according to Spanish newspaper El Diario, claim her calls to Salvamento Marítimo “could have the objective of ensuring the arrival on Spanish territory” of migrants and say she is suspected of links to a “criminal mafia that traffics people.”

Salvamento Marítimo would not comment on the case of Maleno, who was also not available to interview. However, one of the agency’s staff told El Mundo newspaper that “if there is a vessel in trouble, some [migrants] call us directly to help them, but a lot of others also tell Maleno, who then contacts Salvamento to give us their location. That’s not a crime”.

Maleno’s case has coincided with a sharp upturn in the number of migrants trying to reach Spain from African shores. According to Spanish government figures, just under 20,000 undocumented migrants reached the country by sea between January and the end of November 2017, while another 3,000 reached Spain via its two territories in north Africa, Ceuta and Melilla. The total figure is about double the previous year, reflecting Spain’s increasingly popular status for migrants, as clampdowns in Italy and Greece take effect.

The government data also states that 161 people died while trying to reach Spain, although the true figure could be much higher given the difficulties in confirming such statistics.

In recent months the nationalities of those attempting to travel to Spain have changed, with increasing numbers of north Africans, many of whom are fleeing unrest in the Moroccan Rif region.

“[I]n order to sustain current border policies, allegations of facilitating migration and collusion with smuggling networks have become the new weapon on both shores of the Mediterranean to discredit those who challenge restrictive migration policies,” she wrote in the Guardian.

Gazzotti cited the case of 15 sub-Saharan Africans who died while trying to swim round Ceuta’s border fence in 2014. After lobbying by NGOs, an investigation was recently reopened into the handling of the tragedy by the Spanish civil guard, several of whose officers were waiting on the shore and fired rubber bullets as the migrants approached.

Maleno says she suffered a campaign of harassment after publicly criticising the Spanish police last summer for allegedly using violence against migrants. One Twitter post addressed to her showed a photo of a gun below the words: “I suggest you shut up or you will die … You are making the authorities uneasy.”

There was more controversy surrounding Spain’s handling of migrants in December when an Algerian man, Bouderbala Mohammed, died in an immigrant stay centre in Málaga. The authorities reported that he committed suicide in his cell, but Algerian television claimed he was killed by riot police.