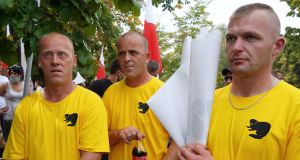 Polish farmers take part in a demonstration in Warsaw against a proposed ban on fur farms and kosher meat exports. Photograph: Janek Skarzynski/Getty

Poland’s ruling national conservative Law and Justice (PiS) party is scrambling to retain power after its junior coalition partners threatened to walk out of office.

A year after returning for a second term, the United Poland and Accord parties voted against two key government Bills on Thursday.

PiS pushed ahead with the animal rights Bills, restricting ritual slaughter of animals for export as well as fur farming and wild animals performing in circuses. The proposals were eventually passed with the assistance of liberal opposition parties but opposed by the coalition’s junior partner deputies.

They are fearful of a backlash from the rural conservative and farming voter base crucial to the government’s hold on power. Poland’s fur industry employs around 50,000 people; it is also a major exporter of halal and kosher meats.

Experts say the Bills, taken together, could have an economic impact of €1.6 billion on meat and fur producers.

The rebellion sparked crisis talks on Friday, with senior PiS officials doubtful the alliance could continue in its present form.

“It’s not the end of the world, but it is the end of the coalition and probably [means] a minority government,” said Marek Suski, deputy PiS parliamentary party leader on Friday. “Our former coalition partners should clear their desks.”

United Poland holds 19 seats in the Sejm parliament while another partner, Accord, has 18 deputies. In last year’s parliamentary election, they strengthened the share of the seats in parliament held by the coalition.

The animal rights rebellion is seen by many as part of a wider proxy battle over the succession to PiS chairman Jaroslaw Kaczynski. Though he holds no government post, the influential 71-year-old cat-lover is considered by most to be Poland’s de facto leader.

In recent days, however, he has run into unusual levels of opposition over a cabinet reshuffle to reduce the number of portfolios and ostensibly boost government efficiency.

Mr Kaczynski stood firm against rising opposition – to the reshuffle and the animal rights Bills – by his coalition partners, telling a PiS parliamentary party meeting that “the tail cannot wag the dog”.

Younger government figures are already beginning to position themselves to succeed – or usurp – the PiS leader.

At present the greatest tension – and attention – is between United Poland head Zbigniew Ziobro, a hardline conservative and controversial justice minister, and prime minister Matteusz Moriawecki, a Kaczynski loyalist and relative moderate.

The ambitious Mr Ziobro has a long history with PiS and was once a close confidant of Mr Kaczynski until he was thrown out of the party a decade ago. He has reportedly been pressing for s readmission to PiS.

For weeks he has been ramping up pressure on PiS, withdrawing Poland from the Istanbul Convention on preventing violence against women and a second proposal to force NGOs to declare any foreign funding. On Friday a spokesman for his United Right party held a door open to a revival of the alliance, saying “any option is now possible, both with a minority government and early elections”.