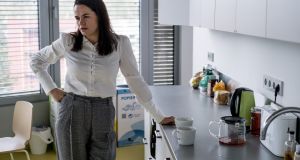 Svetlana Tikhanovskaya : “I’m still not a politician and it is particularly difficult to try to be one at such a tough period for my country.” Photograph: Arturas Morozovas/Getty

The summer Alexander Lukashenko became president of Belarus, an 11-year-old girl called Svetlana Pilipchuk travelled from its small southern town of Mikashevichy to the other side of Europe – to Roscrea, Co Tipperary.

It was 1994, three years after Belarus had emerged from the crumbling Soviet Union, and eight years on from the nuclear accident at Chernobyl, just 250km from Mikashevichy, which had spewed radioactivity across the region.

As Lukashenko swept to power on an anti-corruption campaign, Svetlana and other children from areas affected by the Chernobyl disaster were spending a few weeks with host families far away in Ireland, where charities helped give them holidays, healthcare and a glimpse of a country that was very different to Belarus.

Twenty-six years later Lukashenko still rules his nation of 9.5 million people, but many of them now recognise someone else as their president: Svetlana Tikhanovskaya – formerly Pilipchuk – who until May was a housewife with no interest in politics, and is now a leader of what she calls a peaceful, democratic Belarusian revolution.

Lukashenko faced the biggest challenge of his career, amid widespread frustration over political and economic stagnation in Belarus

“I’m still not a politician and it is particularly difficult to try to be one at such a tough period for my country. It’s a heavy weight but I’m doing my best to bear this responsibility,” she told The Irish Times this week.

Before plunging into politics to run in last month’s election, she studied to be a teacher and then worked as an interpreter and a secretary, while raising two children alongside her husband, Sergei Tikhanovsky.

Angry at the bureaucracy that was stifling his business, Tikhanovsky started making video blogs about Belarusians’ struggle to make ends meet. They belied the rosy picture presented by state media, and led to rallies at which crowds denounced Lukashenko and brandished slippers to “squash the cockroach”.

As other dangerous adversaries prepared to run in the election – former banker Viktor Babariko and former diplomat Valery Tsepkalo – Lukashenko faced the biggest challenge of his career, amid widespread frustration over political and economic stagnation in Belarus and his dismissal of coronavirus as a “psychosis” that could be beaten by vodka, sport, the sauna and hard work in the fields.

His regime responded by banning all three opponents from the vote and arresting Tikhanovsky and Babariko on highly dubious charges.

That prompted Tikhanovskaya to put her name on the ballot and join forces with Tsepkalo’s wife, Veronika, and Babariko’s campaign manager Maria Kolesnikova, who then took their anti-Lukashenko roadshow around the country.

Belarus had seen nothing like it. The trio drew cheering crowds everywhere they went, and their positive, energetic campaign made the dour former Soviet state farm boss appear woefully out of touch, as he delivered long and hectoring speeches to nodding ranks of male officials and military officers.

And yet, when the election results were announced, they gave Tikhanovskaya just 10 per cent of votes and Lukashenko 80 per cent – the same as his share back in 1994.

That was the last Belarusian election to be generally recognised as free and fair, and though subsequent ballots had sparked protests, they were always quickly quashed by the police and KGB security service.

This year is different: more than 100,000 people have rallied in the capital, Minsk, on each Sunday since the election and significant crowds have taken to the streets in other cities, while strike action has disrupted work at state factories that have always been bastions of support for Lukashenko.

The regime’s response is also unprecedented: at least three people have died, hundreds have been hurt and about 10,000 detained in a brutal crackdown that has driven a deep rift between many Belarusians and the authorities. Tikhanovskaya and other protest leaders have been forced to leave Belarus for their own safety; Kolesnikova ripped up her passport to avoid the same fate, and is now in jail.

“Our people will never go back to that state of absolute fear in front of the regime – we have changed absolutely,” Tikhanovskaya said from Lithuania.

“We have started to feel like a nation, and it’s a great feeling. It’s high time that every person feels proud to be Belarusian, proud of what they are doing – they are making history.”

The European Union says it will not recognise the election results or the presidency of Lukashenko, who blames the West for the protests and has received financial and security backing from Russia.

I adore Ireland, its people and its landscapes. I have a very personal love for the country

Tikhanovskaya insists that the opposition seeks good relations with Moscow and the West, and has very simple and limited demands: the release of political prisoners and free and fair elections.

Amid a whirl of meetings with presidents, prime ministers and diplomats, she already looks forward to eventually withdrawing from politics – and also to returning to a country she visited three times in her youth.

“I adore Ireland, its people and its landscapes,” she says. “I have a very personal love for the country.”

“When I first visited, there was a huge gap between our countries in everything – the culture, the shops, the whole environment. I was shocked by how polite Irish people were, how they smiled and always said hello. Belarusians were different then, life was hard, our parents were always struggling to earn money.”

She has particularly fond memories of her hosts – Henry Deane and his family, in Roscrea – who founded the Chernobyl Lifeline charity.

“He’s my best friend there, and it’s a pity that we can’t find a lot of time to talk now. But I always remember Ireland with such warmth in my heart.”

It will be one of the first places she visits as president of Belarus, she hopes, “not because I have to, but because I want to”.

“We know we have a difficult road in front of us. A regime of 26 years can’t be broken in a few days,” she says.

“But we are ready stand to the end. We cannot forget all those who have been beaten and tortured and raped. We would never forgive ourselves if we lost the future for our children, and the people in jail now would be there for a long, long time. We just cannot afford to lose.”