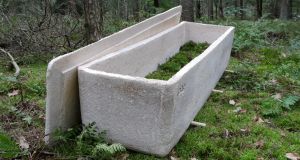 The first 10 coffins have been retailing at €1,250 each. Photograph: Loop

With a nod to the idea of cocooning that has come with the Covid-19 pandemic, the “Living Cocoon” is made of mycelium – the network of vegetative fibres that forms the underground part of fungi – and each one is individually grown for its occupier.

The secret of mycelium is that it’s a natural composter. It breaks down whatever materials it finds in its immediate environment, neutralises toxins and enables other plants nearby to thrive – which is why mushroom hunters have always associated fungi with unusually rich soil.

“Mycelium is nature’s recycler,” says Bob Hendrikx (26), a researcher at the Technical University of Delft, who developed the idea along with colleagues from the Naturalis Biodiversity Centre in Leiden.

“We call the company Loop because it describes a closed-loop system that allows us to dispose of the dead while repairing some of the environmental damage we humans have done. We can enrich the earth after death rather than polluting it. That’s an idea whose time has come.”

While it depends on environmental conditions, a human body typically takes a decade or perhaps more to decompose, while the varnished wood and metal parts of the traditional coffin, and synthetic clothing, can last even longer.

With a mycelium coffin, says Henrikx, the entire process is completed in two or three years, because the coffin itself actively promotes the composting process, improving the quality of the soil at the same time.

Even more impressive is the production process. Each coffin is grown to order and is allowed to dry naturally, which takes a matter of weeks.

The drying process places the mycelium’s natural composting function on pause. Ingeniously, however, once the coffin is buried and exposed to ground water, the mycelium comes alive again and supercharges the decomposition.

“That’s the beauty of mycelium: it’s constantly looking for waste to convert into nutrients. That includes oil, plastic and even metal. For instance, it was used to help improve the soil in Chernobyl after the nuclear disaster in 1986.”

The first funeral using a Living Cocoon has already taken place in the Netherlands.

Two funeral co-ops in The Hague are partnering with Loop. The first 10 coffins have been retailing at €1,250 each – though they will become cheaper, says Hendrikx, as they become “the new normal”.

While the mycelium coffins are a world first, other options are available. American actor Luke Perry was buried in a specially design mycelium suit when he died unexpectedly of a heart attack last year.