Coronavirus: WHO warns of ‘alarming’ spread across Europe

Hans Kluge, the World Health Organisation's regional director for Europe, has warned that the rise in Covid-19 cases across the continent should "serve as a wake-up call" for all Europeans. Video: WHO 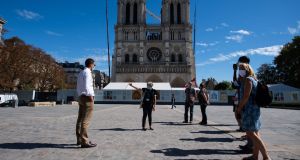 A guide gives explanations to tourists in front of Notre-Dame-de-Paris cathedral in Paris. France’s health minister warned of a ‘worrying rise’ in intensive care admissions in some parts of the country. Photograph: Martin Bureau/AFP/Getty Images.

The World Health Organisation has warned of “alarming” transmission rates of Covid-19 in Europe, saying weekly reported cases were now higher than during the pandemic’s peak and “a very serious situation” was unfolding across the continent.

As France’s health minister warned of a “worrying rise” in intensive care admissions in some parts of the country and authorities from Madrid to Dublin weighed their next steps, the WHO’s regional director for Europe, Hans Kluge, said last week’s seven-day tally of new cases on the continent was 305,054, against 264,675 in the week of March 30th.

More than half of European countries had reported increases of 10 percentage points or more during the past fortnight, Kluge said on Thursday - while in seven, new infections had more than doubled over the same 14-day period.

“In the spring and early summer, we saw the impact of strict lockdown measures,” he said. “Our efforts, our sacrifices, paid off. In June, cases hit an all-time low. These September case numbers should serve as a wake-up call for all of us.”

While the surge in infections partly reflected more comprehensive testing, he said, it also showed “alarming rates of transmission across the region,” particularly among 25 to 49-year-olds, who make up the largest proportion of new cases.

The continent had so far lost 226,524 lives to Covid, Kluge said, with a “monumental impact on mental health, economies, livelihoods and society”. Fatigue was setting in and needed “to be understood and addressed where it puts us at risk”.

Reinforcing the WHO’s concerns, the European Centre for Disease Control (ECDC) said the 14-day case notification rate for the region had risen for more than 50 days and its projections showed “potential for a larger upsurge of cases” later in the year.

The EU agency said more testing was “not the only reason for the increase”, which it blamed on “the relaxation of hygiene and physical distancing measures,” saying the rise was a powerful reminder that “the pandemic is not over”.

The ECDC said recent evidence from scientific research had confirmed that physical distancing of 1 metre or more “ensures a five-fold reduction in the transmission risk, with every extra metre of distance giving twice the protective effect”.

Governments around Europe are urgently considering reintroducing tougher measures in an attempt to slow the virus’s renewed rapid spread, and several have already done so.

In France, which this week introduced new rules in Marseille and Bordeaux including limiting gatherings to 10, outlawing standing at bars and banning drinking on the street, health minister Olivier Veran demanded regional prefects in Lyon and Nice present plans for new distancing laws to the government by the weekend.

“The epidemic is once more very active in the country,” Veran said, adding that five in every 100 tests were now positive compared with one in every 100 at the start of the summer and ICU admissions in some parts of the country were a concern. Gatherings of friends and family were a “major source of infections”, he said, and hygiene and physical distancing measures “must be observed more than ever”.

However, according to Le Monde, President Emmanuel Macron is reluctant to take more drastic steps, having decided the country must learn to “live with the virus” - while protecting its most vulnerable - unless the surge in cases is mirrored by a parallel surge in hospital and intensive care admissions, which is not yet the case nationally.

“He considers France is in a position to control the virus for the moment,” an adviser told the newspaper, denying the government was now pursuing a strategy aimed at achieving herd immunity.

“We are at the point we were in February.”

In Spain, where the 14-day cumulative total of cases per 100,000 people stands at 287, the highest in Europe, the health minister, Salvador Illa, on Thursday called on the Madrid regional government “to do whatever needs to be done”.

Spain had logged a total of 614,360 Covid cases by Wednesday, up almost 11,200 on the previous day. Over the past fortnight, 120,657 new infections have been diagnosed, a third of them in the capital and its region, while 366 people have died across Spain from Covid in the past seven days, 124 of them in Madrid.

The regional government of the Madrid president, Isabel Diaz Ayuso, which said it was looking at bringing in lockdowns of specific areas and limits on movement this weekend, has been criticised for its slow reaction to the re-emergence of the virus.

On Thursday it appeared to perform a U-turn, saying the word “lockdown” made people nervous and it needed to send “a message of calm”. Spanish media said the regional government was planning to reopen the enormous field hospital set up at the height of the previous peak in Madrid’s main conference centre.

Fears of a new lockdown mounted in Athens, with the number of fatalities in Greece rising to 322 on Thursday and two-thirds of intensive care beds in the greater Athens region of Attica, home to more than half of the country’s population, now full.

“If this situation continues, especially in Attica, we will undoubtedly have a lockdown, there is no doubt about it,” Nikolaos Sypsas, an infectious disease expert and a member of the scientific committee advising the government, said on Thursday.

The ECDC said in a technical update on Thursday that not all countries that had recorded an increased number of confirmed cases in August and September had also observed “an associated increase in rates of hospitalisation or mortality”.

In some of these countries, this would be accompanied by “increased hospital use and deaths as a result of higher rates of community transmission,” the ECDC said. Those that had kept measures more constant over time might expect to see hospitalisation rates and deaths remain “broadly consistent”, it said.