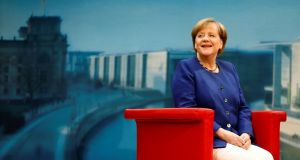 When German chancellor Angela Merkel returns to work on Friday after three weeks off, the first thing she will do is study the latest poll numbers.

With six weeks to the September 24th federal election, her Christian Democratic Union (CDU) is steady on 39-40 per cent, a firm 15 points ahead of her Social Democrat (SPD) rivals. And yet, although one in two Germans wants her party to lead the next government, according to an ARD public television poll, it’s not all good news.

Germans don’t elect the chancellor directly but personal support for Dr Merkel has slumped 10 points in just one month to 59 per cent.

One reason may lie in the poll’s second analysis, of German attitudes to the car industry and its ongoing scandals.

A week ago, Berlin achieved only minimal co-operation in a meeting with VW, BMW and Daimler to reduce noxious emissions. The result: two-thirds of those polled believe German politicians are too indulgent of the car industry.

The auto industry is a crucial pillar of the German economy, employing 800,000 directly and generating a fifth of total economic output. But after two years of revelations, and new scandals on a weekly basis, some 57 per cent of Germans say they have lost trust in the country’s calling-card industry.

And yet auto industry anger and insecurity over possible inner-city diesel bans have not translated into shifting political support.

Support for Dr Merkel’s camp has remained steady in all polls, despite criticisms from environmental groups that the CDU/CSU-controlled transport minister is in the pocket of the car lobby.

Meanwhile, the Green Party has been unable to draw any political capital from the ongoing diesel affair, and is stuck on 8 per cent, alongside the Left Party, liberal Free Democrats (FDP), and the far-right Alternative für Deutschland (AfD).

Though the election campaign has yet to begin in earnest, FDP leader Christian Lindner believes “the race for number one has been decided”.

“The CDU is by far the strongest political force, it is not possible to govern without or against the CDU,” said Hermann Binkert, of the INSA polling institute.

If current poll numbers translate into results, many political analysts and party strategists agree that the real election will take place in coalition talks after polls close on September 24th.

Germany’s complex two-vote electoral system – and uncertainty over whether five or six parties will enter the next Bundestag – make it difficult to predict support required for a majority.

So if the CDU forgoes a third grand coalition with the SPD, which guarantees a comfortable majority, Dr Merkel might need two coalition partners to govern.

Despite starting his campaign early, SPD challenger Martin Schulz faces an uphill battle in the coming six weeks. His centre-left party is back to where it was in polls before he stepped in as leader, sparking a flash of euphoria in January and February.

According to a poll for Stern magazine by the Forsa institute, Mr Schulz has never been less popular with just 21 per cent support from voters. Between factory visits this week, he sent out an unintentionally negative message, insisting he would run for re-election as SPD leader regardless of next month’s result.

With barely contained schadenfreude, Dr Merkel’s general secretary Peter Tauber said: “The SPD are so burned-out that they urgently need a term in opposition.”