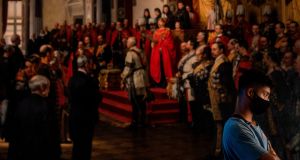 A visitor at the German Historical Museum stands in front of a painting by Anton von Werner. Photograph: John MacDougall/AFP via Getty Images

More than 20.98 million people have now been reported to have been infected by the novel coronavirus globally, and at least 759,053 have died from the disease, according to a Reuters tally.

Here are updates from across the world on the Covid-19 pandemic.

The EU has agreed to buy at least 300 million doses of AstraZeneca’s potential Covid-19 vaccine, which could weaken plans led by the World Health Organisation (WHO) for a global approach on vaccination.

Britain will buy potential Covid-19 vaccines from US drugmakers Johnson and Johnson and Novavax Inc, the companies said on Friday.

Britain extended lockdown restrictions for regions of northwest England on Friday, saying there was no evidence that the Covid-19 infection rate in the areas had fallen.

Britons were meanwhile rushing back from summer holidays in France after the announcement of a 14-day quarantine on arrival in the UK for all travellers from across the Channel, due to come into effect on Saturday.

France declared its capital Paris and the port city of Marseille high-risk zones for coronavirus on Friday, as the French government reported more than 2,500 new infections for the third day in a row.

The seven-day moving average of new infections, which smoothes out reporting irregularities, increased to 2,041, doubling over the last two weeks. This meant the average went beyond the 2,000 threshold for the first time since April 20th, when France was in the middle of one of Europe’s strictest lockdowns. The total official tally of confirmed coronavirus cases in France now stands at 212,211. Its death toll increased by 18 to 30,406 on Friday.

Spain, the country with the most coronavirus cases in Europe, is closing nightclubs and calling on local authorities to enforce a law that bans drinking in the streets under measures announced on Friday.

Public smoking has been prohibited if people can’t maintain a distance of at least 2m, in a bid to prevent clusters of smokers outside nightspots and restaurants. Bars will close at 1am and table sizes will be restricted to no more than 10 people, Spanish health minister Salvador Illa told reporters. All of the measures are meant to stem the spread of the virus among younger people.

Germany’s government on Friday declared mainland Spain and the Balearic islands as a virus risk area. Travellers returning to Germany from Spain – a highly popular tourism destination for Germans – will have to test for the virus and quarantine until they have obtained the result.

Italy registered 574 new coronavirus cases on Thursday, the highest such figure since May 28th. There were three additional deaths from the virus, according to data published by the Italian health ministry. The increase in cases was driven by 127 new cases in the Veneto region and 97 in Lombardy, the data showed.

Greece set a temporary 50-person limit on public gatherings on Friday and said restaurants and bars in Athens and other areas must close by midnight, as the country seeks to contain a recent spike in Covid-19 infections. The deputy civil protection minister said the limit on public gatherings would last until August 24th and be imposed in parts of the country where infection numbers have risen.

Health officials in Norway have recommended the use of face coverings in certain situations and parts of the country amid an increasing number of Covid-19 cases. It’s expected that the guidance will apply to public transport in the capital, Oslo.

The US Centres for Disease Control and Prevention on Friday reported that the US has now seen a total of 5,228,817 cases of the novel coronavirus, an increase of 52,799 cases from its previous count. The centre said that the number of deaths from the disease in the US had risen by 1,169, bringing the total US death toll to 166,317.

Mexico, having hit more than half a million official coronavirus cases and 55,000 deaths, will help produce a vaccine that could be distributed in the region next year.

New Zealand has extended a lockdown in the country’s biggest city, Auckland, by 12 days in response to the first national coronavirus outbreak in months.

An inquiry has shown that health officials in Australia’s most populous state, New South Wales, made “unjustifiable” and “inexcusable” mistakes that allowed cruise ship passengers with Covid-19 to disembark in March in central Sydney.

Two cities in China have found traces of the novel coronavirus in cargoes of imported frozen food, although the World Health Organisation downplayed the risk of the virus entering the food chain.

Vietnam has registered to buy a controversial Russian Covid-19 vaccine, as it fights a new outbreak after several months with no local cases.

The Kuwaiti cabinet said on Thursday that Kuwait would start implementing the fourth stage of a gradual go-back-to-normality plan on August 18th. – Agencies