US politics: Still unclear what Trump wants to do with second term as election day looms 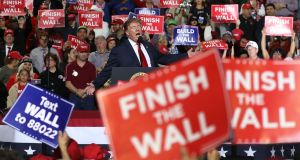 US president Donald Trump was a teenager when Lyndon Johnson, the 36th US president, signed the bill that helped him become the 45th. The 1965 Immigration and Nationality Act gets lost in the lore of the 1960s, but few events outside war and the Depression have done more to change America.

By ending the preference for European immigrants, the law expanded the US population over time and made it enormously less white. It also led to the build-up of ethnic angst that broke through half a century later. The election of Trump in 2016 was above all a howl against demographic upheaval.

His growing chances of defeat this year reflect the easing of that angst. Among the reasons for Trump’s polling woes – the bungling of the coronavirus pandemic, the shrewdness of his Democratic challenger Joe Biden – one of the least examined is the collapse of immigration as a political issue.

The public’s central grievance with modernity – the free flow of people – has been answered, if more through force majeure than deliberate policy

The subject on which Trump defined himself against the Republican establishment, and then Democrat Hillary Clinton, has gone mostly undiscussed in this otherwise raucous election.

In 2016, 70 per cent of registered voters told Gallup that immigration was “very important” to them. Now, 52 per cent do. Even this decline in salience does not capture the softening of underlying attitudes. In July, Americans who demand less immigration were outnumbered by those who want more for the first time since the 1965 law. Those who regard it as on the whole a good thing lead voters who think the opposite by the widest margin this century.

This trend in public sentiment was under way even before the pandemic froze national borders. It testifies to the growth of millennials and Generation Z in the electorate, as well as to Trump’s efforts to restrict the inflow of foreigners.

Now, with countries essentially sealed the world over, and unlikely to regain their former openness for some years, the thorniest subject in all of politics – who belongs? – is all but neutralised.

All of which leaves Trump in the quandary of his life. The closed society of his dreams is at hand. But then what is the point of his presidency? There are still tariffs to be slapped on foreign wares, of course, and China to take on, but the animating mission of populists everywhere is to cut immigration.

It is the one thing that unites the free-traders of Brexit with the protectionists of the Trump White House; Germany’s Alternative für Deutschland (AfD), which began as a crusade against euro zone bailouts, with the insurgent parties of southern Europe. Immigration is the populist’s iron lung: they are existentially dependent on something they resent.

It is rash to draw lessons from a pandemic that is not yet a year old, but the signs are ominous for these movements. As well as Trump’s unpopularity, the AfD is diminished and the UK’s Labour opposition is gaining on the Conservative government. A state election in Vienna last weekend went abysmally for the right-wing Freedom Party.

Some of this is down to a new premium on technical competence over heartland “values” in government. But the pandemic’s chilling effect on mass movement is much the larger factor.

In essence, the public’s central grievance with modernity – the free flow of people – has been answered, if more through force majeure than deliberate policy. This frees them to judge political parties on their other ambitions, and populists tend not to have enough.

Three weeks from US election day, it is still unclear what Trump wants to do with a second term. Next to the devastating clarity of his 2016 campaign, reducible not just to a slogan but to the image of a wall, no policy stands out.

If he has a forward-looking project, it is the rivalry with China, but foreign affairs rarely decide an election and Biden is almost matching his stern line.

This loss of purpose will dog the nativist right throughout the West in the coming years. If their movement is to be more than a noisy blip, it needs a mission beyond the keeping out of foreigners. There is no sign that it has either the inclination or the imagination to devise one.

Trump never fleshed out the paternalist economics that seemed to be on the tip of his tongue four years ago. Nor has he followed up the criminal justice reform that united progressives with libertarians in 2018. We are left to suspect that most populists only really have one song to sing, and events have rather sapped the demand to hear it. The closing of borders might turn out to be a victory from which they never recover. – Copyright The Financial Times Limited 2020