People of Praise, a Catholic covenant community, has an outsized influence on members

At a hearing to confirm judge Amy Coney Barrett to the US Supreme Court, Democratic Senator Dianne Feinstein quoted Republican Lindsey Graham's pledge that he would not support confirming a new US supreme court justice in an election year. 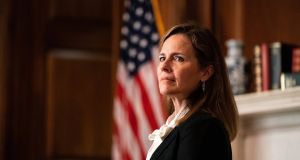 It’s been almost 30 years, but Bridget keenly remembers life in Pittsburgh as a child living among the People of God covenant community.

When she was 11 or 12, she was sent to Ohio where she stayed with a family from the People of God community for several weeks.

“My understanding is that I was sent for training on how to be a wife,” says Bridget, who asked not to be fully identified. “Girls and boys were separated other than at meals. I was taught how to do things that a wife would do: how to cook, how to prepare a chicken, how to iron clothing.”

People of God emerged from the so-called Catholic charismatic renewal movement of the late 1960s. So did the People of Praise covenant community that counts Amy Coney Barrett, the nominee for the vacant position on the United States supreme court, as a member.

Both communities have similar pastoral care structures and have been criticised for their strict traditional enforcement of men and women’s roles that some former members say border on cult-like behaviour.

Barrett’s confirmation hearing in front of the US senate is set to be held this week despite the senate currently on recess due to several Republican senators having contracted Covid-19. Democrats, worried that Barrett’s conservative worldview and ties to People of Praise could curtail abortion rights and jeopardise the Obama-era Affordable Care Act, have objected to holding the hearing just weeks before the November 3rd presidential election.

Barrett has previously said that her religion would in no way impinge on her professional life.

“If you’re asking whether I take my faith seriously and I’m a faithful Catholic, I am,” she said during a 2017 confirmation hearing for a position on the US court of appeals for the seventh circuit. “Although I would stress that my personal church affiliation or my religious belief would not bear in the discharge of my duties as a judge.”

The Associated Press reported around that time, however, that references to Barrett, including pictures, were deleted from the People of Praise website. On October 6th this year, the Guardian newspaper reported that as a law school student at the University of Notre Dame in South Bend, Indiana, Barrett lived at the home of the founders of People of Praise. Last week the Washington Post reported that Barrett had held a leadership role in the community as a “handmaid”, citing records from 2010.

In the late 1960s, the Catholic charismatic renewal movement emerged and flourished at Franciscan and other Catholic universities in Michigan, Pennsylvania, Ohio and at the University of Notre Dame in South Bend, Indiana, where People of Praise is headquartered.

The central aspect of covenant communities is the signing of a covenant or contract regarded as a lifelong commitment to the community. Questions sent by The Irish Times to a spokesperson for People of Praise asking whether the organisation closely influences and directs members’ lives, and whether Barrett has signed the covenant, went unanswered.

Its website states that “Our covenant is neither an oath nor a vow, but it is an important personal commitment.”

For Bridget, the years she and her family spent as members of People of God prior to leaving in the early 1990s remain a dark chapter in her life.

Bridget says she became depressed as a teenager and again periodically as an adult. “I’ve dealt with trauma from my childhood on many different levels. The way that I grew up has left me with scars personally. You’re made to feel unworthy. The impact that that community had on my psyche had a significant effect on my mental wellbeing.”

Hearing Barrett had been nominated to the supreme court “hit me really hard because I lived that, and it definitely triggered me”, she says.

“[Barrett] has signed a covenant. The covenant is a contract. In order to be a member of the Sword of the Spirit [an umbrella association of covenant communities], she has promised to make the People of Praise and the Sword of the Spirit her number one, not the United States, and definitely not the people of the United States. She has signed a piece of paper that says she is dedicating her life to this organisation.”

This perspective is shared by John Flaherty, who was a member of the Sword of the Spirit for 13 years until 1990 and has since spent years documenting covenant communities.

“[Amy Coney Barrett’s] dominant experience has been having a father and mother totally committed [to] People of Praise. How that translates as a supreme court justice of the United States of America is anyone’s guess, but it certainly is not like being raised Catholic or Jewish or in a common religious experience,” he says.

“She is the first major step of putting someone who thinks this way in a position of tremendous power and influence over our democracy.”

Bridget says she has no doubt that, as a supreme court justice, Barrett would side to repeal Roe v Wade, the landmark 1973 ruling that made it legal for a woman to choose to have an abortion, should it appear before her.

“If she has signed this covenant, which she must [in order] to be a member of this organisation . . . she openly shares her life with the leaders of that organisation,” she says.

“So many people think it’s just another church. It’s not.”