Coronavirus: UK to send armed forces into schools as Spain keeps log of those who refuse vaccine 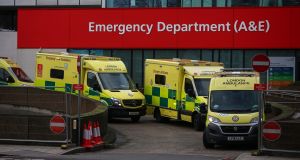 Ambulances parked outside the St Thomas’ Hospital emergency department in London on December 28th as patient demand for the service surpasses the first wave of the coronavirus crisis. Photograph: Hollie Adams/Getty Images.

The UK government will draft in the armed forces to help with coronavirus testing in schools as pressure builds on prime minister Boris Johnson to delay the return of students as a more infectious strain of the virus takes hold.

The number of new cases in the UK reached a daily record of more than 41,000 on Monday and hospitalisations exceeded the peak recorded last spring.

Pakistan said it had found three cases of the variant in people returning from the UK while Germany is considering legislation to ensure unvaccinated people are treated fairly as the economy begins to open up.

In the US, the House of Representatives passed a bill replacing the $600 stimulus checks in the newly enacted virus relief bill with $2,000 payments, as Democrats and moderate Republicans voted in favor of a proposal backed by president Donald Trump.

Global cases of Covid-19 passed 81.2 million on Tuesday, while deaths surpassed 1.77 million. More than 4.6 million vaccine shots have been given globally.

Here are some developments from the Coronavirus crisis cross the world.

Members of the armed forces will be drafted in to support coronavirus testing operations for thousands of school and college students in England, the ministry of defence (MoD) has announced.

The MoD said 1,500 military personnel would be deployed to ensure that testing systems were up and running by the time pupils returned for the new term in January. The majority of the personnel will form local response teams, providing support and phone advice to institutions needing guidance on the testing process and set-up of the testing facilities.

The announcement comes as pressure is growing on the UK government to abandon plans to reopen secondary schools in January amid concerns it could cause further spikes in coronavirus cases.

According to the department, support will be done “predominantly through webinars and individual meetings”, but teams would also be on standby to provide in-person support at short notice.

Students will swab themselves in the vast majority of cases, under the supervision of a school staff member or volunteer who has been trained for the role, and teachers are not expected to take a role in the testing process.

Spain will create a register of people who refuse to get a Covid-19 vaccine, part of European efforts to counter public resistance to the new shots.

While the register will be shared with other European partners, it won’t be made public, Health Minister Salvador Illa said in an interview with La Sexta television on Monday. Taking the vaccine is voluntary in Spain and the data will be “treated with the utmost respect for data protection,” Mr Illa said.

On Monday, Spain became the fourth European country to record more than 50,000 coronavirus deaths. The country has been hit particularly hard by the virus, forcing the government to impose a state of emergency in March.

The number of people dying from the virus has been slowing since November, according to Fernando Simon, the head of Spain’s medical emergency response centre. However, data gathered over the holiday period can have gaps in reporting, he said at a press conference on Monday.

Germany has recorded several hundred coronavirus-related deaths each day in the past few weeks. The number of fatalities rose by a further 848 in the 24 hours through Tuesday morning, according to data from Johns Hopkins University, after having crossed the 30,000 mark for the first time on Sunday.

The changes mean those in the northern part of the city’s northern beaches will revert to stricter “stay-at-home” restrictions, with indoor gatherings banned and outdoor gatherings limited to five people for exercise and recreation.

Police were called to the beach late on Friday after about 100 people gathered for a Christmas party, breaching current public health orders. No fines have been issued, but a 25-year-old man has been issued with a court attendance notice, after allegedly failing to comply with a move-on order.

“People in the northern beaches have been doing their part, big time, to keep not only themselves but the rest of Sydney safe. It is absolutely appalling to see a large gathering of people who didn’t give a damn about the rest of Sydney,” Mr Hazzard said.

“Let me tell you, I am hoping that will not become a super-spreader event - but there is every chance that it could be,” he added.

The mayor of Waverley, Paula Masselos, blamed “visitor behaviour” for the scenes in her local government area, which she called “appalling, disrespectful and unacceptable”, in contrast to the “diligence and sacrifice” of “our community”.

The Philippines is banning travellers from 20 nations with the new Covid-19 strain, including the UK, Japan, Australia and Germany.

The country also said it approved Johnson and Johnson’s application to conduct a clinical trial of its coronavirus vaccine in the Southeast Asian nation.

The trial applications of Chinese firms Sinovac Biotech and Sichuan Clover Biopharmaceuticals are still under review, while Pfizer’s vaccine is under review for emergency use.

India added 16,432 new coronavirus cases over the past 24 hours, the federal Health Ministry reported Tuesday, the lowest number in more than six months. The country is the world’s second-most affected nation after the US with over 10.2 million recorded infections.

As many as 148,153 people have died from the virus in the country, which hopes to start rolling out vaccinations as soon as one is cleared for early use by its regulators.

The ministry also reported that it had quarantined and isolated six people who had travelled from the UK and tested positive for a new variant of the virus. India last week suspended air travel from the UK until December 31st.

The US House on Monday passed a bill replacing the $600 stimulus checks in the newly enacted virus relief bill with $2,000 payments, as Democrats and moderate Republicans voted in favor of a proposal backed by president Donald Trump.

The bill cleared the chamber on a 275 to 134 vote, reaching the two-thirds majority needed for the expedited procedure used Monday.

It now heads to the Senate where it will create a political dilemma for Republicans. Many of them previously opposed stimulus payments larger than the $600 in the existing law, in part over concerns about the price tag. But Trump’s stamp of approval still has sway with GOP voters.

Meanwhile health officials in California are set to announce an extension of the regional stay-at-home order in place for Southern California as a surge in cases has overwhelmed hospitals and left few, if any, intensive-care unit beds left available, Governor Gavin Newsom said.

Los Angeles County has been seeing 12,000 to 15,000 new cases per day over the past few weeks, Mr Newsom said Monday. Mr Newsom said more than 261,672 vaccine doses have been administered in California so far.

He said that by end of this week, the state should have received all 904,000 Moderna vaccine doses and 858,000 Pfizer-BioNTech vaccine doses the state was expecting by this point.