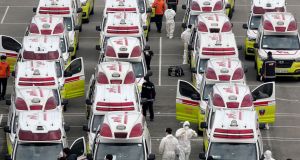 The number of confirmed coronavirus cases in the UK leapt to 36 after 13 new patients were identified.

Chief medical officer Prof Chris Whitty said three of the patients were close contacts of a known Covid-19 case that was transmitted within the UK — believed to be a Surrey resident.

Another new patient, from Essex, has no relevant travel to an affected area, Prof Whitty said on Sunday.

He added investigations were ongoing as to whether the patient had contracted it “directly or indirectly” from an individual who had recently travelled abroad.

Among the remaining cases, six had recently travelled from Italy, while two had been in Iran.

These patients are from London, West Yorkshire, Greater Manchester, Hertfordshire and Gloucestershire. A Tayside resident who recently travelled from Italy became the first person in Scotland to be diagnosed with coronavirus, the Scottish Government said.

All of the newly identified cases are being investigated and health officials have begun tracing anyone who had close contact with them.

Churches were closed in South Korea on Sunday with many holding online services instead as authorities fought to rein in public gatherings, with 586 new coronavirus infections taking the tally to 3,736 cases.

That came a day after the biggest daily jump of 813 cases in South Korea’s battle with the largest virus outbreak outside China, the Korea Centers for Disease Control and Prevention (KCDC) said. The death toll rose to 18.

In Seoul, the capital, about a dozen worshippers were turned away from the Yoido Full Gospel Church, which put a sermon for its 560,000 followers on YouTube, filmed with a small choir instead of all 200 members and 60-strong orchestra.

Authorities have warned of a “critical moment” in the battle on the virus, urging people to refrain from attending religious services and political events and stay home this weekend.

Of the new cases, 333 were from the southeastern city of Daegu, the location of a church at the centre of the outbreak, and 26 from the nearby province of North Gyeongsang, KCDC said.

Confirmed cases worldwide have neared 86,600 while deaths are about 3,000.

The US, Australia and Thailand reported their first deaths caused by the coronavirus, while the Trump administration expanded travel restrictions, including advisories barring travel to parts of Italy and South Korea most affected by the outbreak. Washington State health officials said the man who died was in his 50s. In Australia, a 78-year-old man died in a Perth hospital after being quarantined aboard the Diamond Princess cruise ship, a local health official said. Thailand said a 35-year-old retail worker died in a Bangkok suburb.

Ireland reported its first case of Covid-19 on Saturday. The patient, a male in the eastern part of the country, is currently receiving “appropriate medical care”.

Iran ran’s death toll from the new coronavirus has reached 54, health ministry spokesman Kianush Jahanpur told state TV, adding the number of those infected had reached 978. “There were 385 new cases of infected people in the last 24 hours, increasing the total number to 978. The death toll is 54,” Mr Jahanpur said, calling on Iranians to avoid any unnecessary trips and stay at home. Iran has had the highest number of deaths from coronavirus outside of China, where the outbreak originated, and a handful of countries in the region have reported infections among people who travelled to the Islamic Republic. Some neighbouring countries have closed their borders with Iran and several countries have stopped flights.

Italy has registered more than 1,100 confirmed cases of coronavirus since the contagion came to light in wealthy northern regions on February 20th and at least 29 people have died. The country will this week introduce measures worth €3.6 billion to help the economy withstand the largest outbreak of coronavirus in Europe, economy minister Roberto Gualtieri said on Sunday. In an interview with La Repubblica newspaper, Mr Gualtieri said this amounted to 0.2 per cent of gross domestic product and would come on top of an aid-package worth €900 million that was unveiled on Friday for the worst-impacted areas.

Mr Gualtieri said the new Bill would include tax credits for companies that reported a 25 per cent drop in revenues, tax cuts and additional funds for the health service.

The economy minister said he was confident the European Union would approve the necessary hike in Italy’s official deficit target, adding Eurogroup ministers would talk mid-week by telephone about the situation.

The coronavirus epidemic shut down the Louvre Museum in Paris on Sunday, as workers who guard its art said they were fearful of being contaminated by the flow of visitors from around the world. Also worrying staff is that museum workers from northern Italy are now visiting the Louvre. They have come to collect works by Leonardo da Vinci that were loaned for a major exhibition. Earlier on Sunday several hundred determined athletes defied a government-ordered ban on large public gatherings to run Paris’s half-marathon on Sunday. The run was one of a series of events across France to be cancelled as the government attempts to contain the coronavirus outbreak. Only a tiny fraction of the 44,000 people expected at the official event actually turned up. France had 100 confirmed cases of coronavirus on Saturday evening, most of them concentrated in a handful of towns and villages in the Oise region north of Paris and near Annecy in the Alps, and 86 people were in hospital. There have been two deaths from the virus in France since the outbreak started.

Mainland China reported 573 new coronavirus infections on Saturday, up from 427 the previous day, for the highest daily increase in a week, national health authorities said on Sunday. The new cases were concentrated in the central city of Wuhan, where the virus emerged late last year, with 565 infections, or nearly 99 per cent of Saturday’s total. The death toll of 35 was February’s second lowest daily total and was down from 47 the previous day. The tally of deaths in mainland China is now 2,870, the National Health Commission said. Of the deaths, 34 were in the province of Hubei, whose capital is Wuhan and the epicentre of the outbreak.

A total of 41,625 patients have been discharged, the commission said, or 52 per cent of total mainland infections, though officials have warned that some could again develop symptoms. To cushion the economic impact of the epidemic, China has ordered districts to be classified into “high-risk”, “medium-risk” and “low-risk”, with the latter expected to end traffic curbs and let everyone resume work.

On Saturday, Hubei said 11 of its 103 counties had reported no new cases for at least 14 days, meeting the “low-risk” criteria but as many as 58 of its counties are still deemed “high-risk”. Despite some positive changes, the situation was still at a critical stage, and Hubei could not yet ease curbs on outbound travel, Ying Yong, the provincial general secretary of the ruling Communist Party, said on Saturday.–Reuters