Accelerating coronavirus could reach ‘all countries’ 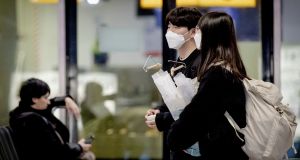 The World Health Organisation has said that the coronavirus could reach most “if not all countries”.

The warning comes after more confirmed cases began to emerge globally, including Mexico and Nigeria which recorded the first case in sub-Saharan Africa on Friday.

“The outbreak is getting bigger,” said WHO spokesman Christian Lindmeierat a Geneva news briefing. “The scenario of the coronavirus reaching multiple countries, if not all countries around the world, is something we have been looking at and warning against since quite a while.”

Covid-19 was reported in five more countries on Friday: Nigeria, Estonia, Denmark, Netherlands and Lithuania, with all those diagnosed having a travel history linked to Italy.

In Geneva the annual motor show was cancelled after the government banned mass gatherings. Mr Lindmeier said WHO was looking carefully into reports of some people getting re-infected.

He said that health authorities would expect people with the infection would be immune for at least a period afterwards. But again this is something “we do not yet know”.

The man started his journey in Milan and arrived in Lagos on February 4th, spending the night at an airport hotel before travelling to work in a neighbouring state. He was first treated on February 26th and subsequently transferred to a containment facility .

WHO regional director for Africa Dr Matshidiso Moeti has warned the “window of opportunity the continent has had to prepare for coronavirus disease is closing”.

Egypt reported the first case of Covid-19 in Africa on February 14th while Algeria declared a case last Tuesday – another Italian adult who arrived in the country on February 17th.

Officials at WHO have previously warned that porous borders, flow of travellers and poorly resourced healthcare systems mean the risk of an outbreak across Africa was “very high”. And they raised significant concerns about the ability of “fragile health systems” to cope with the epidemic.

In the US acting White House chief of staff Mick Mulvaney acknowledged that the coronavirus was likely to cause disruptions to everyday life, such as school closures and changes to public transportation.

“Are you going to see some schools shut down? Probably. Maybe see impacts on public transportation? Sure, but we do this. We know how to handle this,” said Mr Mulvaney said.

Seeking to reassure Americans worried about a potential public-health crisis and stock-market losses tied to the outbreak he said “what I’d like to do today to calm the markets is tell people to turn their televisions off for 24 hours.”