Coronavirus: ‘Satan and a virus’ won’t close some US churches on Sunday 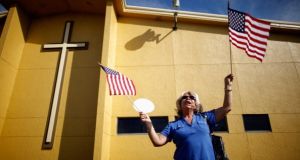 Some US churches plan to hold in-person services on Easter Sunday, saying their right to worship in person outweighs public health officials’ warnings against holding large gatherings during the coronavirus outbreak.

Most US churches are expected to be closed on Sunday, and a broad majority of observant Americans are expected to follow authorities’ recommendations to avoid crowds to limit the spread of the potentially lethal Covid-19 respiratory disease caused by the new coronavirus.

But not all of them. “Satan and a virus will not stop us,” said the Reverend Tony Spell, 42, pastor of the evangelical Life Tabernacle Church near Baton Rouge, Louisiana. He expects a crowd of more than 2,000 to gather in worship at his megachurch on Sunday. “God will shield us from all harm and sickness,” Spell said in an interview.

Mr Guterres told the UN Security Council the pandemic could potentially lead “to an increase in social unrest and violence that would greatly undermine our ability to fight the disease”.

The council is the UN’s most powerful body and it has been silent on Covid-19 since it started circling the globe in January. But after Thursday’s meeting the council issued its first brief press statement, saying it expressed “support for all efforts of the secretary-general concerning the potential impact of the Covid-19 pandemic to conflict-affected countries”.

It came after world leaders and health officials warned that hard-won gains in the fight against coronavirus must not be jeopardised by relaxing social distancing over the Easter holidays.

A spike in deaths in the UK and New York and surges of reported new infections in Japan and in India’s congested cities make it clear that the battle is far from over.

“We are flattening the curve because we are rigorous about social distancing,” New York governor Andrew Cuomo said. “But it’s not a time to be complacent. It’s not a time to do anything different than we’ve been doing.” Worldwide, the number of confirmed Covid-19 cases has climbed to nearly 1.5 million, with almost 90,000 deaths, according to Johns Hopkins University. The true numbers are almost certainly much higher.

The US has by far the most confirmed cases, with more than 430,000 people infected - three times the number of the next three countries combined.

Numbers released by the US government showed that 6.6 million American workers applied for unemployment benefits last week, on top of more than 10 million in the two weeks before that.

That amounts to about one in 10 American workers, the biggest, fastest pileup of job losses since the world’s largest economy began keeping records in 1948.

Budget minister Maria Jesus Montero said “normal life” will gradually return in Spain beginning on April 26th but warned it would be a staggered easing. Italian premier Giuseppe Conte is expected to announce soon how long the country’s lockdown will continue.

The number of confirmed coronavirus cases in the Netherlands rose by 1,335 on Friday to 23,097, health authorities said, with 115 new deaths. The total death toll is now 2,511, the Netherlands’ Institute for Public Health said in its daily update.

Fifty crew members aboard France’s flagship aircraft carrier the Charles de Gaulle have tested positive for the coronavirus, the armed forces ministry said on Friday. In a statement, it added that three sailors had been preventively evacuated by air to a military hospital in Toulon, southern France, home port of the carrier.

French pharmaceutical giant Sanofi is donating 100 million doses of a malaria drug being tested for use as a treatment against the new coronavirus. The company said in a statement on Friday that the hydroxychloroquine doses will be given to 50 countries. But it also warned that hydroxychloroquine has “several serious known side-effects” and tests are so far inconclusive over its safety and efficacy in treating Covid-19.

In Germany, Chancellor Angela Merkel emphasised that people should not travel as usual this weekend, saying: “Even short trips inside Germany, to the seaside or the mountains or relatives, can’t happen over Easter this year.”

Lithuania is restricting public movement and imposing a lockdown on major cities during Easter to prevent the further spread of infection in the predominantly Catholic nation.

The Swiss death toll has reached 805, the country’s public health ministry said on Friday, rising from 756 people on Thursday. The number of positive tests also increased to 24,308, up from 23,574, it said. Swiss police are seeking to dissuade drivers from heading to the Italian-speaking Ticino region, the only part of Switzerland south of the Alps and one of the worst-hit by the pandemic. Roadblocks were being set up near the northern entrance of the Gotthard tunnel to separate out would-be visitors.

Hungary needs more ventilators and intensive care hospital beds as part of its efforts to weather the coronavirus crisis, prime minister Viktor Orban said on Friday, as the government reported the single biggest daily increase in infections. Government data showed confirmed coronavirus cases jumped by 210 to 1,190 over the past 24 hours, and the death toll now stands at 77.

A 460-bed Nightingale hospital for the North East of England is being built in an industrial unit bigger than a football pitch, it has been announced. Work has been carried out to convert the site — which was built for the motor industry, close to the Nissan plant on Wearside — into a hospital which will take coronavirus patients if units in the region cannot cope with demand.

The German army is donating 60 mobile ventilators to the NHS as officials scramble to get enough life-saving equipment to meet the expected peak of the coronavirus epidemic.

In a potentially worrying development in South Korea, 91 patients thought cleared of coronavirus had tested positive again. Jeong Eun-kyeong, director of the Korea Centers for Disease Control and Prevention, told a briefing that the virus may have been “reactivated” rather than the patients being re-infected.

Yemen’s internationally recognised government has announced the first confirmed case of coronavirus in the war-torn country, stoking fears that an outbreak could devastate an already crippled healthcare system.

Iran’s total death toll rose to 4,232 on Friday with 122 lives lost in the past 24 hours, according to a health ministry spokesman. The total number of people diagnosed with the disease increased by 1,972 To a total of 68,192, the spokesman, Kianoush Jahanpur, said on state TV, adding that 3,969 people were in critical condition. Iran is the country most affected by the pandemic in the Middle East.

A Japanese sumo wrestler has tested positive for the coronavirus, further threatening postponement of next month’s Summer Grand Sumo Tournament, which has already been delayed. The wrestler, whose name has not been disclosed, first developed a fever last week, but none of his stablemates or officials have complained of symptoms of the virus.

The total number of infections in Japan hit 6,003 on Friday, NHK public broadcaster reported.The prefecture of Aichi, home to the Toyota car company, declared its own state of emergency, saying it cannot wait for the government to add it to its list.

India, whose 1.3 billion people are under lockdown until next week, has sealed off dozens of hot spots in and around New Delhi, the capital. It will supply residents with food and medicine but not allow them to leave. The number of confirmed cases exceeds 5,000, with 166 deaths.

Kazakhstan will extend the state of emergency declared over the coronavirus outbreak until the end of April, the Interfax news agency reported on Friday. The state of emergency ,which has allowed the government to lock down all provinces and major cities and shut down many businesses, was originally due to end on April 15th.

Pakistan is reopening some factories amid a national lockdown to counter the deadly coronavirus pandemic as the south Asian nation expects its exports will decline by 50 per cent in the next two months. Exporters such as Interloop, which supplies to Nike and Puma, have reopened their factories. At least one woman was trampled to death and 20 others were injured in a stampede as authorities distributed money among families affected by the country’s nationwide lockdown, Pakistani police and rescue officials said.

The number of coronavirus infections in Israel has risen to more than 10,000. The government imposed strict measures to contain the pandemic early on but has seen it tear through the insular ultra-Orthodox religious community. On Friday, the Health Ministry reported a total of 10,095 cases, including 92 deaths.

Israeli authorities moved quickly in mid-March to close borders, ground flights and shut down all non-essential businesses. But in the early days and weeks of the pandemic many in the ultra-Orthodox Jewish community ignored guidelines on social distancing.

Singapore has suspended the use of Zoom for online education after hackers hijacked a lesson and showed obscene images to students. In an incident known as “Zoombombing”, two hackers interrupted a geography lesson a day after Singapore closed schools on Wednesday as part of partial lockdown measures to curb local transmissions of Covid-19.

The Philippines has stopped doctors, nurses, medics and other healthcare workers from going abroad while it needs their skills to meet the threat of the

Authorities in Indonesia’s capital have started to implement stricter restrictions to slow the spread of coronavirus. Jakarta has recorded 280 deaths. People who are violating the restrictions face up to a year in jail and a 100 million rupiah (€5,800) fine.

In New Zealand, police warned people not to drive to their holiday homes over Easter or they would be risking arrest.

“It’s simple - travelling to and from different towns and cities risks spreading Covid-19, and puts lives at risk,” police said.

Weeks before the coronavirus spread through much of the world, parts of Africa were already threatened by another kind of plague — the biggest locust outbreak some countries had seen in 70 years. Now the second wave of the voracious insects, some 20 times the size of the first, is arriving. Billions of the young desert locusts are winging in from breeding grounds in Somalia in search of fresh vegetation springing up with seasonal rains.

Millions of already vulnerable people are at risk. And as they gather to try to combat the locusts, often in vain, they risk spreading Covid-19 — a topic that comes a distant second for many in rural areas.