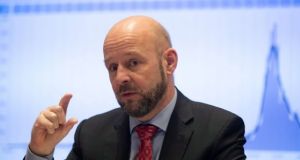 A senior figure on the National Public Health Emergency Team (Nphet) has said progress in suppressing the Covid-19 virus is slowing but is still being made.

Professor Philip Nolan, chairman of Nphet’s epidemiological modelling advisory group suggested, on the basis of the current trajectory, that it could be some stage in April before new coronavirus case numbers fell below 100 per day.

He forecast that the forthcoming summer would be “an outdoor summer” with people taking domestic holidays, recreation at home and socialising in the open air as much as possible.

He forecast that people would be asked to continue to limit their number of social contacts but not to as low a number as at present.

However, he stressed “the reality that some level of mixing between households is going to be required for all of us to stay sane as we enter the summer”.

Speaking on Sunday, he said Nphet had advised the slow and cautious return to in-class education as this was such a priority for society.

However, he indicated that after that a very careful, step-by-step, approach would be needed in relation to opening up other elements of society and the economy.

Prof Nolan told RTÉ Radio One’s This Week programme that the new B117 variant was effectively a new virus. Careful examination would have to be made on the impact of each step taken in re-opening society and the economy before another was undertaken.

He said the country at present had a seven-day average of about 800 Covid-19 cases per day, down from 930 the previous week and 1,050 a fortnight ago.

He said the slowdown in the suppression of the virus was due mainly to the dominance of the more transmissible B117 variant.

Unfortunately the country was still at very high risk due to the additional transmissibility of the new B117 variant.

“We are in a position we can advise the phased cautious return to in-class education because that is such a priority for our society.

“From there on in, we are going to have to work through other priorities and what are the low-risk, high-return things we can do over the coming months in terms of the education of children, the return of non-Covid healthcare, how can we for the benefits of people’s mental health can we facilitate some level of safe but increased social contact and beyond that period of time, when case numbers are substantially lower, what are the priority areas of the economy that can resume activity because they are lower risk than other areas.”

Prof Nolan suggested it would be inappropriate to set out timelines on what restrictions could be lifted if daily case numbers reached a particular level by a specific date.

He said Nphet and the Government would have to observe the impact of increased social mixing associated with measures that may be taken to ease restrictions in the context of the B117 variant and to “see where we are at the point and then determine what the next step will be”.

Prof Nolan said that with the re-opening of schools that care need to be taken that there was no spill over in terms of case numbers arising from increased mixing by parents on the margins.

He cautioned parents against engaging in increased social mixing as schools reopened.

Prof Nolan said the vaccination programme “brings enormous hope” which coincided with a period of great vulnerability during which people had to take care not to spread the virus again.

Meanwhile, Taoiseach Micheál Martin’s comments on Saturday that he does not foresee pubs and restaurants being open again before mid-summer have continued to anger the hospitality sector.

The Irish Hotels Federation (IHF) has said the tourism industry is “devastated” that the hospitality sector is unlikely to open before the mid-summer mark.

On Sunday, Elaina Fitzgerald Kane, president of the IHF, called for a review of help for the sector and warned: “ Failure to provide adequate supports now will have long term implications that could take years to repair.”

In an interview with RTÉ Raidió na Gaeltachta on Saturday, Mr Martin said the new coronavirus variants were of most concern to the Government and public health doctors, and because of that reopening the country would be very slow.

Asked about the reopening of hospitality, he said: “We don’t foresee that before the middle of the summer...what the public health authorities are saying is that we stick with this until end of April, then we reflect on the situation and make decisions about the months ahead.”

“There won’t be much of a change (after this phase) because the numbers are still too high...what we intend is to reopen schools gradually...it will be slow, we’ll be cautious, because we have to monitor the effect on the virus. The biggest challenge we face is new variants as they could impact the vaccines. It’s sensible to open slowly, as the vaccines are coming.”

Ms Fitzgerald Kane reacted on Sunday, saying: “Public health must always be the number one priority and we recognise the difficult balance the Government has to achieve.

“However, our tourism community is devastated to learn yesterday in a radio report that the hospitality sector is unlikely to reopen before mid-summer. This has resulted in acute frustration and anxiety.”

She said that prior to the pandemic, 270,000 people’s livelihoods were supported by tourism and 70 per cent of these were outside of Dublin.

“In some cases, whole communities are built around tourism,” she added.

Ms Fitzgerald Kane called for “an urgent review of the existing supports for the tourism and hospitality sector.”

“If the all-important summer period is being eroded, additional supports are now required to safeguard businesses and the livelihoods they support until society reopens and the sector and wider tourism industry can recover.”

The IHF also asked the Government to intervene with the banks “to ensure they have appropriate supports and engagement processes in place for our businesses and team members until Covid-19 has been suppressed.”

She said: “The implications of yesterday’s announcement are huge in terms of confidence in the survival of Irish tourism.

“Our people are our greatest asset and today 160,000 tourism people who have temporarily lost their jobs, learned that their employment is unlikely to be restored until mid-summer.

“This is about real people and real livelihoods.”

Separately, a group of scientists and academics known as the Independent Scientific Advocacy Group has accused the Government of not having a coherent strategy to tackle the pandemic.

In a statement this morning, the group said “proper resourcing and autonomy” should be given to public health units around the country.

It also called for the provision of supported hotel quarantine for all new arrivals by sea and air.

“If we started today, and did Zero Covid right, we could be open by early summer,” the statement said.

“By not having any coherent strategy the government has given us all of the pain without the gain. With a well-articulated strategy we can work together towards a goal, and avoid repeating the mistakes of 2020,” the statement concluded.

Meanwhile, the Department of Health has been asked to review the sequencing of the vaccine rollout, including the potential to increase the prioritisation for people with certain underlying conditions, the Irish Times understands.

Mr Martin has previously said the Government is of the view that people who are immunosuppressed or have conditions like Parkinson’s or cystic fibrosis should be prioritised because if they were to contract the disease, they would be at greater risk.

The National Immunisation Advisory Council (NIAC) has now developed a paper on the issue. It is said to have incorporated the latest international and Irish data and also looked at the risks to people with underlying conditions.

A source said that the NIAC paper was considered and endorsed by the National Public Health Emergency Team (Nphet).

The paper has been delivered to Minister for Health Stephen Donnelly and it is being “discussed” this weekend.

The Government will this week announce a new version of the plan for Living with Covid-19 that will look at the path to easing restrictions in the future, although it is understood no dates will be set.

The plan will incorporate estimated schedules for vaccination and could look at what restrictions could be eased in tandem with this.

The Cabinet is expected to consider the Living with Covid-19 plan and issues related to the vaccine rollout this week before any final decisions are made.

Minister for Health Stephen Donnelly visited the Helix at Dublin City University (DCU), where he said Ireland has to accept it is lagging behind the UK when it comes to vaccinating people against Covid-19.

“People are very reasonably looking at the UK and saying, well, the UK are further ahead,” he told reporters at The Helix at Dublin City University (DCU), the State’s first mass vaccination centre which began inoculations on Saturday.

“And they are. We have to accept that, they are.”

“We’re a member of the EU, going with the EU,” Mr Donnelly said.