US president banishes predecessor’s threats, insisting US is ‘fully committed’ to Nato

In his first major foreign policy address as US president Joe Biden replaced his predecessor’s “America First” slogan with “America’s Back”. 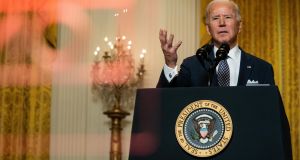 US president Joe Biden ripped out the Trump-era foreign policy at its roots on Friday, promising to earn back Washington’s reputation for “trusted leadership” by eschewing a transactional approach in favour of transatlantic co-operation.

In his first major foreign policy address since taking office a month ago, Mr Biden replaced his predecessor’s “America First” slogan with “America’s Back” – and walked back, point by point, an approach to the European Union and Nato that alarmed the US’s European allies.

The 78-year-old leader was particularly forceful in banishing Donald Trump’s threats against Nato, insisting the United States was “fully committed” to the defence alliance, would “keep faith” with its joint defence commitment and honour its “unshakeable vow” that an attack on one member is an attack on all.

Addressing the Munich Security Conference by video link, Mr Biden said his administration was fully committed to the multilateral world order and saw co-operation with Europe as the best hope for defending democracy against its enemies.

“We are in the midst of a fundamental debate about the future and direction of our world, we are at an inflection point,” he said, “between those who argue, given all the challenges we face – from the fourth industrial revolution to a global pandemic – that autocracy is the best way forward, and those who understand that democracy is essential to meeting those challenges”.

Bolstering trust in the West was best done by joining forces to beat Covid-19 and contain global security challenges, he said, to “demonstrate that democracy can still deliver for our people in this changed world”.

He said historians – and this generation’s great-grandchildren – would study this pivotal moment in world history: how the West responded to threats to its economic and political models from China and Russia using tools from cyberattacks to artificial intelligence.

If the US and Europe could work together to place a module on Mars, as they did this week, the president said it must be possible to co-operate more closely on the challenges here on Earth.

“We have everything we need and I want you to know the US will do our part,” he said. “[We] will stand with you on this fight for our shared values and meet the challenges of this new moment in history.”

Mr Macron said France will this month reach its Nato defence spending commitment of 2 per cent of gross domestic product, while Dr Merkel said Germany was still at 1.5 per cent but making progress.

“This is the way to rebalance the transatlantic relationship and provide assurance for our US friends,” said Mr Macron. “Having the EU much more invested in defence makes us much more credible as members of Nato.”

During Trump-era tensions, the German leader was a passionate defender of multilateralism in Munich. On Friday, she echoed Mr Biden’s words that co-operation improved the West’s odds in the fight against coronavirus and in facing the dual challenges posed by China and Russia.

“It is up to democratic countries not just to talk about freedom and values but to deliver results,” she said. “Germany stands for a new chapter in transatlantic relations and we are ready.”

Amid debate on the future of the Nato mission to Afghanistan, she indicated Germany was prepared to extend its 18-year presence to prevent the “wrong forces gaining the upper hand once more”.

Despite this era of unprecedented challenges, Mr Guterres said he saw a growing convergence of interests among competing ideological blocs. “The West needs to find a way to assert its values – with the enlightenment, tolerance, rationality, human rights at its centre,” he said, “to assert and engage in a meaningful dialogue and co-operation with other key actors on the global stage”.