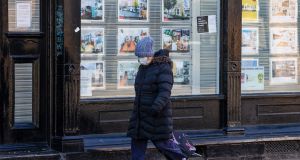 A closed estate agents during the coronavirus outbreak. Flynn and Associates is offering free accommodation in unsold properties to doctors and nurses working during the Covid-19 crisis. File photograph: Hollie Adams/Bloomberg

A Dublin-based estate agent is offering free accommodation to doctors and nurses who are living in situations unsuitable to their work during the coronavirus pandemic.

Andrew Rafter of Flynn and Associates is matching vacant properties, which are currently for sale, with hospital staff who need to live apart from their families or housemates to avoid potential contamination.

Mr Rafter has identified a number of properties close to hospitals that he had been marketing for sale, but which his clients have agreed can be used for short-term housing for hospital workers.

“These are properties that are for sale but are currently vacant and their vendors have agreed they can be offered, by way of a license agreement, to front line workers.”

The move follows new recommendations that hospital staff should live in separate accommodation to avoid the risk of spreading the virus.

Since Tuesday morning Mr Rafter has reached agreement on the use of four apartments, which he expects to be occupied hospital workers in the coming days, with five or six more homes already in the pipeline.

“Obviously not every property for sale is empty, but where they are, and where the vendor is financially able, we would call on them to contact us and make that property available to a nurse or doctor for a short period of time.”

Licence agreements have been drawn up for Mr Rafter by Justin Hughes Solicitors.

“The licence agreement protects the home owner while still allowing the hospital to use the property. Unlike a lease a licence can be withdrawn on short notice and it doesn’t confer upon the occupier the tenancy rights associated with a lease,” Mr Hughes said.

The licences will initially be for four weeks, but can be extended on a week-to-week basis. While there will be no rental charge, a deposit would be requested, a portion of which could be used to cover cleaning if required at the end of the occupancy. Mr Rafter is asking property owners to contact him at arafter@flynnassociates.ie.

Meanwhile more than 50 homes have been offered for medics returning from abroad and other hospital workers under a local authority scheme which started less than one week ago.

Vacanthomes.ie was developed in 2017 by Mayo County Council on behalf of the local government sector, to allow local authorities to identify empty houses that could be used to help solve the housing crisis.

Tom Gilligan, director of services with Mayo County Council, has repurposed the site to source homes, on a three to six-month basis for key workers such as hospital staff.

“We have had a phenomenal response to the call out. We have been inundated with calls and queries, and we are logging new properties everyday. We have been offered more than 50 units, with more coming in all the time,” Mr Gilligan said.

The homes are mostly in Dublin, Galway, Limerick, Waterford and Cork. Some have come from individuals, but a number of multiple property owners are also making homes available, he said. A couple of home owners have also taken up Mr Gilligan’s suggestion that they would move to their holiday homes to free up their houses near to hospital.

“We have been offered some great homes, including places 10 minutes walk from the Mater Hospital and in close proximity to the Beacon. It’s really been great to see people get behind this initiative.”