President cedes stage as experts predict up to 240,000 deaths from Covid-19 in US

March 24th, 2019: US president Donald Trump says he hopes to ease Covid-19 restrictions and reboot the US economy by Easter, April 12th, despite health experts warning that restrictions might need to stay in place for months. Video: The White House 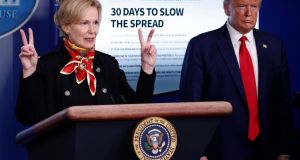 As the number of coronavirus cases rises in the United States, the nation’s attention has turned to the daily coronavirus briefings from the White House.

The evening briefing has become must-see TV, a fact not lost on President Donald Trump, who spent much of Sunday tweeting about his high “ratings”. The star attraction is not the president, however, but the double act leading the briefings – top immunologist Dr Anthony Fauci and coronavirus taskforce chief Dr Deborah Birx.

The seasoned medical experts have become the star protagonists – the Patrick Dempsey and Meredith Grey, if you will, for diehard fans of Grey’s Anatomy.

Flanked by charts and modelling projections, the duo calmly set out the latest projections for the coronarvirus spread on Tuesday.

Like an old couple comfortable in each other’s company, each politely deferred to the other as they took turns to answer questions from the podium.

Though 79-year-old Fauci has become the subject of conspiracy theories in far-right corners of the internet, his heavy Brooklyn accent and sunny disposition have become the voice of reason and leadership for many in the country.

“We are a very strong and resilient nation,” he said, in a tone that was almost presidential. “Let’s all pull together and make sure, as we look forward to the next 30 days, we do it with all the intensity and force that we can.”

Meanwhile, the real president appeared for once to be happy to cede the stage to the experts.

Tuesday saw a marked shift in tone and attitude from Trump, whose response has seesawed wildly in the face of the global pandemic.

As Fauci and Birx displayed sobering graphics that showed between 100,000 and 240,000 Americans could die in the months ahead, Trump struck a more sombre tone than usual.

“This is going to be a very, very painful two weeks,” he said, a note of concern coming through his usual monotone voice as he read from pre-prepared notes. “We will prevail, we will win and hopefully it will be in a relatively short period of time.”

But as the marathon two-hour briefing went on, he offered an alternative narrative of the past few weeks, claiming that he had predicted the crisis.

Although he said that some of his friends and businessmen had advised him to “just ride it out and think of it as the flu”, he added: “It’s not the flu. It’s vicious.”

In fact, Trump has repeatedly compared the coronavirus threat to the annual flu as he explained his decision not to shut down the economy. As recently as March 9th, he tweeted: “So last year 37,000 Americans died from the common Flu. It averages between 27,000 and 70,000 per year. Nothing is shut down, life & the economy go on. At this moment there are 546 confirmed cases of CoronaVirus, with 22 deaths. Think about that!”

When asked if the delayed response by the US may have increased the numbers affected, he said the real question was “What would have happened if we did nothing?”, although no one ever suggested that the US should do nothing.

He claimed on Tuesday that everyone was caught unawares by the virus – “The one thing nobody really knew about this virus was how contagious it was”, he argued. But as recently as a month ago, as Covid-19 was peaking in China, he was dismissing the threat, saying: “It’s going to disappear. One day, it’s like a miracle, it will disappear.”

With Trump now warning of “a great national trial unlike any we have ever faced before”, he urged citizens and businesses to “make sacrifices”.

Gone was the message of a week ago when Trump said he did not want the “cure” to be more damaging than the sickness.

The reason for Trump’s latest change of heart was unclear. He has mentioned his shock at seeing footage of body bags outside Elmhurst hospital in Queens near where he grew up. The bleak modelling presented to him by Birx and Fauci predicting up to 240,000 deaths may have weighed on his thinking.

Whatever the reason, with more than 200,000 cases now reported, Americans will be hoping that the president embraces a consistent and logical policy, and abandons the erratic and incoherent approach that has characterised his response to date.

How Trump changed his tune:

Mar 9th – “Nothing is shut down, life & the economy go on. At this moment there are 546 confirmed cases of coronavirus, with 22 deaths. Think about that!”

Mar 17th – “I’ve felt it was a pandemic long before it was called a pandemic.”

Mar 24th – “Easter’s a very special day for me. Wouldn’t it be great to have all of the churches full? You’ll have packed churches all over our country. I think it would be a beautiful time.”

Mar 31st – “This is going to be a painful two weeks. Our strength will be tested, our endurance will be tried ... We’re going through the worst thing that the country’s probably ever seen.”