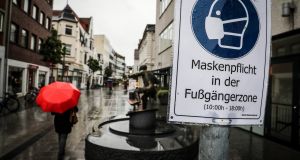 A sign reading ‘Face masks mandatory inside the pedestrian zone’ in Delmenhorst, northern Germany, a town which has become a recent Covid-19 hotspot. Photograph: Focke Strangmann/EPA.

Germany and Italy reported another record gain in coronavirus infections, as France and Spain became the first countries in Western Europe to pass one million cases since the start of the pandemic.

Underlining the challenge faced by governments across the region, Germany registered 12,331 new infections in the 24 hours through Thursday morning, according to data from Johns Hopkins University. That’s the first time daily infections have exceeded 10,000 and took the total to 397,922.

Italy’s 15,199 new cases reported late Wednesday were well above the previous high of 11,705, as Rome and Milan - the country’s political and financial capitals - prepare for a nighttime curfew. France and Spain both passed a milestone one million cases, John Hopkins University figures showed, behind only Russia in Europe, which has more than 1.4 million infections.

The resurgence of the disease across the continent has prompted governments from Ireland to the Czech Republic to introduce tougher measures to try to check the spread without having to resort to full, nationwide shutdowns.

Italian Prime Minister Giuseppe Conte said he cannot rule out further regional curbs, and Spanish authorities are contemplating a curfew for the capital, Madrid. The country registered 6,114 new cases on Wednesday, bringing the total to 1,005,295. France, which has imposed a nightime curfew in Paris and eight other major cities, is close behind, with 1,000,369 infections.

The Czech Republic - the European nation worst affected by the new wave of the disease - also registered a daily record of cases Wednesday, with 14,968. The government earlier approved a series of measures to minimise social contact as it warned that its health system is at risk of collapse as soon as next month.

German Health Minister Jens Spahn on Wednesday became the first minister in Chancellor Angela Merkel’s cabinet to test positive for Covid-19, adding to the growing number of politicians worldwide to catch the virus.

Like Merkel, Spahn has repeatedly urged strict adherence to distancing and hygiene rules.

The pace of new cases in Germany has accelerated dramatically this week, with new highs being registered for three straight days. One district in Bavaria on the border with Austria imposed a lockdown after infections climbed above a rate that triggers an automatic tightening of restrictions.