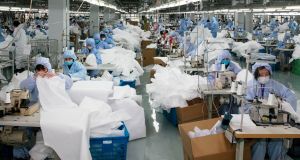 Workers producing protective clothing at a factory which previously produced suits and sportswear and switched production for the fight against coronavirus in Wuxi in China’s eastern Jiangsu province. Photograph: Getty Images

The Chinese government on Thursday sacked its top two officials in Hubei, the province at the centre of the coronavirus epidemic, just hours after announcing a sharp rise in new infections and deaths from the disease.

Hubei reported 14,840 new cases – a 10-fold surge over the number reported on Wednesday, while new fatalities more than doubled to 242. The sudden increase stemmed from changes in the methodology for how officials are counting coronavirus cases.

The surge will complicate efforts by President Xi Jinping, who made his first public appearance earlier this week on the front lines of outbreak, to restart the world’s second-largest economy, an increasingly urgent task for the Chinese Communist party.

In another high-level sacking unrelated to the coronavirus epidemic, the Communist party also replaced the head of the State Council’s Hong Kong and Macau Affairs Office, Zhang Xiaoming, on Thursday morning.

Mr Zhang and other officials responsible for Hong Kong affairs have been criticised for failing to predict the Asian financial hub’s pro-democracy protest movement that erupted in June.

Mr Zhang and Hubei’s Mr Jiang are members of the party’s central committee, which is comprised of its 200 most powerful officials. They are among the most senior cadres to have been fired by Mr Xi other than for corruption.

Thursday’s numbers included 13,332 such cases, which show X-ray evidence of pneumonia-like damage to the lungs, but have not been classified as “confirmed” through further laboratory testing.

Officials also included 135 deaths of clinically diagnosed cases in the death count for the first time.

The total coronavirus cases in Hubei now stand at 48,206, including both confirmed and clinically diagnosed cases.

The government’s official numbers are announced each morning and represent the total of number cases as of midnight the previous day.

On Thursday, several hours after the usual release time for China’s nationwide case count, updated national figures had still not been released.

The last available national count, released on Wednesday but pertaining to a day earlier, showed the total number of confirmed cases nationwide was 38,800.

The directive to count “clinically diagnosed” cases is partly an admission that hospitals at the centre of the outbreak are being overwhelmed with serious cases of pneumonia, indicating likely coronavirus, but lack the resources to conduct laboratory tests for every patient.

The increase was expected to lead to a surge in China’s overall figures, as Hubei’s new cases make up around 80 per cent of the total new cases in the country.

Health experts in and outside of China had questioned the accuracy of the government’s figures, saying that hospitals were under-equipped to test all likely virus victims, and that the current tests had a high rate of false negatives.

In a meeting on Thursday morning, a minister from the central government’s personnel department announced the Hubei dismissals, saying it was in light of the “overall situation, according to the needs of countering the epidemic, and according to the condition of Hubei’s leadership”.

Mr Ma, Wuhan party secretary, was replaced with Wang Zhonglin, state media said. Wuhan residents had ridiculed Mr Ma’s claim on Monday that 10.6m residents, or about 99 per cent of the population, had been checked to determine if they needed treatment.

Both Mr Ying, who takes the reins in Hubei, and Mr Wang have security backgrounds prompting speculation that the government intends to tighten control over Wuhan. – Copyright The Financial Times Limited 2020

Dominic Cummings says he does not ‘regret’ actions and behaved ‘legally’ 17:19
Coronavirus in South Africa: President Ramaphosa warns outbreak will get worse 16:36
Travellers arriving in Spain will not have to quarantine from July 16:15
China calls some Hong Kong pro-democracy protests ‘terrorism’ 13:51
Iranian petrol tanker arrives in Venezuela in defiance of US 13:00