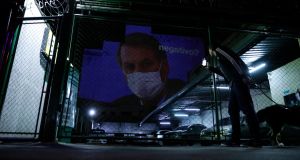 Images are projected to protest against Brazilian president Jair Bolsonaro during a lockdown aimed at stopping the spread of coronavirus in Sao Paulo. Photograph: Rodrigo Paiva/Getty Images

Brazil’s president Jair Bolsonaro has been accused of spreading disinformation about efforts to tackle the coronavirus pandemic after he ordered the army to increase production of an anti-malaria medicine despite the country’s health regulator warning people not to take the drug for Covid-19.

Mr Bolsonaro made the announcement in a video released on Saturday which was quickly turned viral by his supporters. In it he said he had ordered the production increase after learning medical staff in a São Paulo hospital had initiated trials with chloroquine on patients diagnosed with Covid-19.

Despite the fact tests using the drug in the US and Brazil are still very preliminary Mr Bolsonaro classified it as a “possible cure” and ended his video saying: “We have faith that soon we will be free of this virus.”

Brazil’s president has faced severe criticism for consistently seeking to downplay the scale of the crisis provoked by the new coronavirus, also known as Covid-19, and resisting measures to combat it. By the weekend Brazil had recorded 18 deaths from Covid-19 with more than 1,200 people infected.

Even before the president’s video there had been a run on the medicine at Brazilian pharmacies, forcing the health regulator Anvisa to tighten controls over its distribution. The agency’s head has already downplayed the potential of chloroquine – which as well as malaria is used against lupus, arthritis and other rheumatic diseases – in combatting Covid-19.

While it acknowledges “some promising results” Anvisa says there are no conclusions yet about the drug’s benefit in fighting coronavirus and currently does not recommend using cloroquine to treat people with the virus or as a means of preventing infection.

Mr Bolsonaro’s video and an interview on CNN in which he once again talked of a possible “cure” for Covid-19 drew widespread criticism.

Federal deputy and former minister and diplomat Marcelo Calero wrote on Twitter: “Instead of assuming the functions of the president and co-ordinating preventative actions he spreads disinformation.”

Mr Bolsonaro is involved in a dispute with the country’s most powerful governors who are seeking to impose lockdowns in their states in order to impede the spread of the virus. The president has struck back at measures such as shuttering airports and bus terminals saying only the federal government has the right to close them. He has openly said an economic depression caused by the pandemic would mean the end of his government.

As anger over Mr Bolsonaro’s handling of coronavirus grows in Brazil, at least four requests for his impeachment have now been lodged in congress.