Man pushed 91-year-old in front of train in London

A man who pushed a former Eurotunnel chairman onto the tracks of the London Underground has been found guilty of attempted murder. Video: British Transport Police 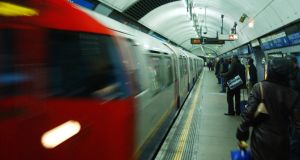 Paul Crossley was found guilty on two counts of attempted murder after pushing two men towards the tracks of the London Underground in April. File photograph: Joel Ryan/PA Wire

A man who pushed a former Eurotunnel chairman onto the tracks of the London Underground has been found guilty of attempted murder.

Sir Robert Malpas (91) said he felt himself “flying” on to the rails at Marble Arch station, after Paul Crossley (46) shoved him from behind with both hands.

CCTV footage of the attack drew gasps from the public gallery in the Old Bailey when it was played in court for the first time.

Sir Robert, who was knighted by the queen in 1998, was rescued by passerby Riyad El Hussani, who leapt from the platform to save him as the electronic arrivals board showed just one minute until the next train.

The retired industrialist was left with a fractured pelvis and a gash to the head requiring 12 stitches after the attack on April 27th.

A second passenger, Tobias French, managed to keep his balance when he was earlier pushed by Crossley as a train pulled in to Tottenham Court Road station.

Crossley told jurors his victims were chosen at random but claimed he had not intended to kill them.

But he was found guilty of two counts of attempted murder on Friday.

Sir Robert, who sat in the public gallery with his arms folded, showed no emotion as the verdicts were read out.

In a statement read to jurors during the trial, Sir Robert said he had been to a pensioners’ lunch in central London before using his freedom pass for his planned journey to Oxford Circus on the Central line.

CCTV footage shows him walking along the platform carrying an umbrella.

He is then approached from behind by Crossley, who has a hood pulled over his cap, before being sent sprawling on to the tracks.

“As I was walking along the platform I felt a two-handed push to my back,” said Sir Robert.

“I felt myself flying over the tracks and landing on the rails. I may have been concussed but only for a very short time. I banged my head on the rails.”

He was rescued by French teacher Mr El Hussani, who had just finished work at the Dorchester Hotel in Mayfair.

He said he heard “screams and shouting” before running 20m to where Sir Robert lay with his clothes and umbrella covered in blood.

“I then jumped straight on to the tracks to save his life,” he said in a statement on the day of the incident.

“I’m still in shock with what’s happened. I also feel sad as I could have lost my life twice.

“I was scared that when I was on the tracks I could have been electrocuted and also could have then been hit by a train.”

Mr French told of his own lucky escape, having been pushed by Crossley as he waited for a train earlier the same day.

“I remember thinking I was very lucky to be alive,” he said.

“There was a train coming in my direction at the time and if I had been pushed in front of it, I’m certain I would have been killed.

“I was fortunate I was quick to defend myself along with help from a member of the public.”

Crossley, who was living in a homeless hostel in east London, was chased and detained by members of the public after he pushed Sir Robert.

He told them: “It’s not right, I know it’s wrong,” before explaining to police officers: “I didn’t get much sleep last night.”

Crossley, who was diagnosed with paranoid schizophrenia when he was 17, admitted he was the man wearing a cap and hood caught on CCTV shoving both men.

He told jurors he had taken crack cocaine the previous day and began feeling paranoid as he made his way to the West End to get coffee.

Crossley claimed he had meant “to scare” Mr French who had “looked at me a bit funny”, and said he was having a panic attack at the time he attacked Sir Robert, intending to “push him over on to the floor”.

He denied two charges of attempted murder and an alternative count of attempting to cause grievous bodily harm to Mr French, but pleaded guilty to a wounding charge in relation to the attack on Sir Robert. – PA