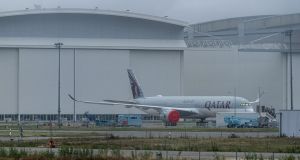 The Australian government says it is “deeply concerned” at the “offensive, grossly inappropriate treatment” of women passengers on a Qatar Airways flight to Sydney, who were ordered to disembark the plane in Doha and were subjected to a strip search and a medical examination.

Flight QR908 to Sydney was due to leave Hamad International airport at Doha at 8.30am on Friday 2 October, but was delayed for four hours, apparently after a newborn infant was found in the airport.

On Monday morning a spokeswoman from foreign minister Marise Payne’s office said the Australian government was “deeply concerned at the unacceptable treatment of some female passengers on a recent Qatar Airways flight at Doha Airport”.

“The advice that has been provided indicates that the treatment of the women concerned was offensive, grossly inappropriate, and beyond circumstances in which the women could give free and informed consent,” the spokeswoman said.

“The government has formally registered our serious concerns about this incident with Qatari authorities. The Department of Foreign Affairs and Trade is engaged on this matter through diplomatic channels.”

In a statement provided to the ABC, the airport confirmed the premature baby was alive.

“At this time, the newborn infant remains unidentified, but is safe under the professional care of medical and social workers,” the statement said.

“Medical professionals expressed concern to officials about the health and welfare of a mother who had just given birth and requested she be located prior to departing.”

It’s understood the woman who gave birth has not been located, and the airport is still requesting that those with information come forward.

Among the 34 passengers on board was Dr Wolfgang Babeck, who was returning to Australia after spending a month in Germany with his ailing father.

Babeck told Guardian Australia that, after about three hours of waiting on board the plane, the airline requested that all the women on board disembark. They returned some time later, and “most of them were very upset”, he said.

“At least one of them was crying, they were discussing what had happened and saying that it was unacceptable and disgusting.”

The plane was then allowed to take off. Babeck said he then spoke to some of the female passengers, who said they had been taken off the plane and led into a non-public area of the airport and subject to a medical examination.

“They were taken by security personnel into the cellar, not knowing what was going on,” he said. “And then they were presented to a female doctor and they were basically strip searched and had to take everything downwards off, all their clothes, even their underwear.

“And then the doctor would try to feel in the uterus and stomach area or lower abdomen to see whether they may have given birth recently.

“Someone had been told that a baby had been found in the toilet and they were trying to find out who the mother was.”

Channel Seven, which first reported the story on Sunday, said the inspections involved 13 Australian women, and took place in an ambulance on the runway.

Qatar Airways told Guardian Australia it had not been contacted by any of the passengers on the flight and said it could not comment.

“We appreciate the concerns and distress expressed to you by the Australian passengers who you have spoken to, and will be investigating these matters with the relevant authorities and officials,” a spokesperson said. – Guardian