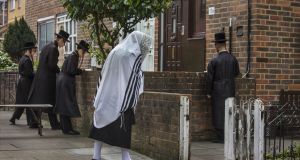 Europe has lost almost 60 per cent of its Jewish population over the past 50 years, mainly as a result of the collapse of the Soviet Union after which many Jews left eastern Europe as borders opened, a study shows.

Only about 9 per cent of the global Jewish population now lives in Europe, compared with nearly 90 per cent in the late 19th century – but similar to the proportion 1,000 years ago.

In total, an estimated 1.3 million Jews live in Europe in 2020, about 0.1 per cent of the continent’s population. Two-thirds of them live in France, the UK and Germany.

“Jews have not only been an integral part of European history and culture but are actually one of its oldest and original component groups,” says the report, titled Jews in Europe at the Turn of the Millennium.

“However, throughout history, the inherent weakness of a landless and powerless minority vis-a-vis territorially based societies and their constituted powers often put the Jewish people in a condition of dependency and instability, and translated into powerful ups and downs in the Jewish presence.”

Between the end of the 18th and 19th centuries, the number of Jews in the world rose to more than 10 million, and climbed further to 16.5 million on the eve of the second World War. Most of the growth was in eastern Europe, then America and then Palestine and Israel.

The murder of six million Jews in the Holocaust reduced the global population to about 11 million, “radically disrupt[ing] what had been up to that moment the continuous build-up and transformation of European Jewry”.

In the latter decades of the 20th century, the “opening of the doors of the Soviet Union” meant that more than 1.8 million Jews left eastern Europe between 1969 and 2020, resulting in “a drastic shift in the Jewish population’s centre of gravity from the east to the west of the continent”.

The study also reports that almost 70,000 Israeli-born Jews now live permanently in Europe, about 25 per cent of these in the UK. The vast majority of European Jews – including 90 per cent of British Jews – are not actively planning to emigrate to Israel or elsewhere.

More than three-quarters of Polish Jews are married to non-Jews, but only 14 per cent of Belgian Jews. Intermarriage has been a “significant factor in the erosion of the Jewish population size” as children in such families are often not brought up as Jewish.

The UK Jewish population had the smallest proportion (4 per cent) of converts to Judaism, and Spain the largest (25 per cent).

In every one of 12 EU countries, Jews were more pro-EU than the non-Jewish population. In Hungary, there was the biggest gap, with 51 per cent of Jews saying they had a strong attachment to the EU, compared with 19 per cent of the total population. There were also big gaps in Poland, Austria and Hungary. – Guardian