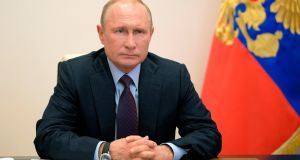 Russian president Vladimir Putin: Covid-19 crisis has derailed a national vote that would allow him to extend his rule beyond 2024. Photograph: Alexei Druzhinin/Sputnik

Vladimir Putin has backed calls to begin easing a national lockdown despite a steady growth in Covid-19 cases, as a poll showed the pandemic has driven the Russian president’s approval ratings to the lowest level in two decades.

In a televised meeting with ministers and regional governors on Wednesday, Mr Putin endorsed a proposal for industrial companies and construction projects in Moscow to restart work on May 12th, while warning against a return to normality beyond the Russian capital.

“In some places, the tough, justified preventive measures need to stay in place and even be increased, and in some places, it is possible to plan a gradual softening,” he said. “But I am saying this again: we cannot jump ahead of ourselves. Any carelessness or haste may cause a setback.”

The pace of growth in new Covid-19 patients in Russia has accelerated to become the world’s second-fastest after the US, despite six weeks of a lockdown that has paralysed the economy. On Wednesday, the country reported a fourth consecutive day of more than 10,000 new coronavirus infections.

Russia’s economy has faced a dual crisis stemming from the collapse in oil prices and the lockdown measures that has squeezed earnings from crude exports – which account for 50 per cent of total budget revenues – and brought other large sectors to a standstill.

The response from Mr Putin’s administration has been more hesitant and less ambitious than that of European economies, which entered lockdowns earlier and vowed big rescue packages to soften the blows to their economies. Now, as European countries have managed to curb new infections, they are gradually loosening the measures.

The crisis has derailed Mr Putin’s plans to hold a national vote on constitutional changes this year that would allow him to extend his rule beyond 2024 – when he will have completed four terms as president.

Meanwhile, his approval ratings fell to 59 per cent in April, the lowest since he became president in January 2000, according to a monthly poll by the Levada Centre, Russia’s only pollster independent of the state. This compared with 63 per cent in March and a high of 89 per cent recorded in 2015 shortly after the invasion of Ukraine’s Crimea region.

The poll suggests Mr Putin’s attempts to delegate unpopular decisions to his ministers and local governors have not shielded him from popular discontent at the handling of the virus. During Wednesday’s meeting, Mr Putin emphasised that they would be responsible for implementing lockdown measures and deciding when to lift them.

“The price of the slightest mistake is the safety, life and health of our people,” he warned. “Therefore, the responsibility for each decision made, by colleagues from the government and the heads of regions, is extremely high.” – Copyright The Financial Times Limited 2020